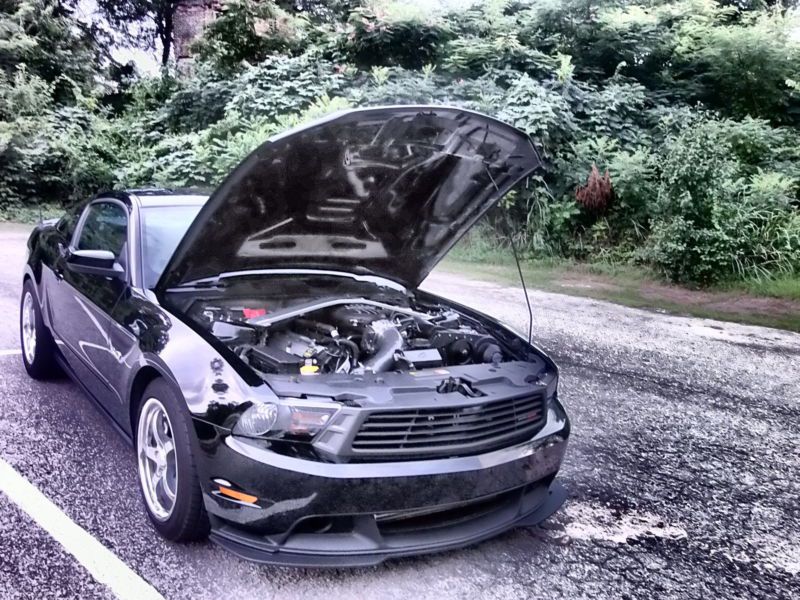 If you have any questions or would like to view the car in person please email me at: monamvvenard@ukvet.net . Ok, Here's the info on this unbelievable mustang. Its 2011 Premium package GT 5.0. Its a black black with a ton of
aftermarket upgrades that I am about to give you the complete rundown on. First the reason I'm selling is that I've
spend an unbelievable amount of money on it and don't want to waste this car on my 60mi round trip commute
everyday. I got transferred across town and this is my only car that I can drive other than my wife's F150 and
that's not going to happen. So here is the complete list and honestly the best bargain on a well over 600HP
car.....
2011 GT Premium w/ heated seats Auto trans 24,xxx miles as it changes I can let you know
- I1 Procharger in the black out finish.... $9k plus install
- Touch screen option for boost control and gauges $500 plus install
- Boss intake
-NGK heat range colder plugs
-BBK Throttle Body
-Procharger intake kit
-stage 2 race intercooler and blow off in bumper
-42lb Ford Racing Injectors and fuel upgrades by procharger
-Saleen style grill
-Boss lower lip
-Tru Fiber Hood professionally sprayed
-also Black mamba carbon fiiber $2k hood if the right deal is reached
-18x11 rear CCW sp wheels with 315/40/18 NT05r radials
- 18x9 front CCW sp wheels with 245/45/18 NT555r streets..........$5k in wheels and tires
- Bmr rear springs
-Bmr rear lower control arms with relocation brackets
-Bmr upper adj control arm
-Lakewood 50/50 rears
-Ford Motorsport 3:73 gears with Royal purple fluid
-Raxiom touoch screen, Bluetooth with sync, navigation
-SVE short antenna
-SVE Xpipe
-Magnaflow street axlebacks
I'm sure I'm forgetting some things to list but as you can tell a ton of money has been spent... well over 25k in
mods and has been really well taken care of. I drive this car everyday on the interstate cruising with no issues it
drives like a completely stock car in touring mode. It has 3 different modes Touring 1psi, Sport mode 7.5psi,
Competition 8.5psi. These modes can be switched on the fly and makes it the best street charger in my opinion. This
thing turned up is a animal and just in sport mode with the old stock hpipe catted it made 560 whp. I have never
been on the drag strip with this car but my guess is mid 10s. Procharger brock into the 10s on a stock car so....
you can imagine. I get a average on my commute of 20.7 mpg so not terrible on gas either and with a auto ( which is
way stronger in these cars ) makes it a great car. I'm crazy on maintaining this car with motorcraft synthetic oil
and filters in the motor and trans.