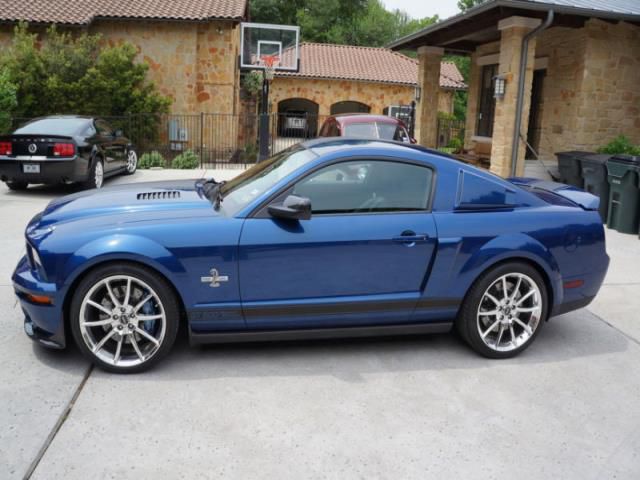 No matter how nasty, ferocious, and fast a car may be, there are always guys who want more. More power, more speed, more performance. And for those guys, a garden-variety Ford GT500 just wasnt enough. Enter this 2007 Ford Mustang Shelby GT500 Super Snake, a 600+ horsepower monster that over-delivers on one heck of a big promise. To get a Super Snake, youd buy one new 2007 Shelby GT500, then send it back to Shelby American for the big horsepower injection. Of course, its a lot more than just more power, with the Super Snake getting some special emblems and its most iconic feature, the custom hood with that giant scoop, all made of carbon fiber and rumored to cost more than $25,000. Each. The Vista Blue paint is factory-issue and like new in every way, and theres no question the guys at Shelby understood what customers expected in a $100,000+ supercar. Panel fit is excellent, the paint looks miles deep, and those satin black stripes add just the right aggressive look without being overpowering. Standard GT500 body parts round out the look, and theres nobody in the world who wont fall in lust with this Mustang the moment they lay eyes on it. The fact that its showroom fresh only adds to the appeal. The interior is standard GT500 as well, but thats hardly a bad thing. Deeply sculpted seats now wear Super Snake embroidery on the headrests and there are some special floor mats, but the rest should be familiar. What that really means is that the money was spent on the important stuff under the hood and since nobodys complaining about the accommodations in the Super Snake, well, better to just leave well enough alone. The black leather remains in excellent condition, as youd expect on a car with under 8535 original miles and the list of features is as long as your arm: A/C, power windows, locks, seats, and mirrors, cruise control, tilt wheel, and a kickin stereo thatll make your ears bleed before the engine will. Auxiliary gauges were added up high to keep an eye on the warmed-over engine, which, incidentally, was sold without a warranty simply because Shelby knew what kind of guys were buying such an animal. No surprise there. This car also has a spotless trunk still outfitted with a big subwoofer kit; hey, with 620 dyno-proven rear-wheel horsepower on tap, curb weight is almost irrelevant. OK, the good stuff: the original 4-cam GT500 engine is treated to a giant supercharger, a Kenne-Bell Whipple unit that out-performs the GT500 unit by a substantial margin. It makes full boost before you can get your foot on the floor and theres not a tire made that can keep it hooked to the pavement. Theres special tuning involved, an upgraded Borla exhaust system, oversized coolers, and everything else that youd need to make a reliable big-horsepower daily driver. The suspension got all of Ford Racings best stuff thats up to the rigors of all that horsepower and the binders are giant Baer 6-piston discs with upsized cross-drilled rotors. Trick Alcoa aluminum wheels were designed just for this car and carry 255/35/20 front and 275/35/20 rear Pirelli rubber. Shelby built only a limited number of these each year and they trade hands very, very rarely, so finding one on the open market is an extraordinary opportunity. Still the nastiest Mustang you can own, this one is fully documented and ready to rock. In addition to everything above, this car comes with all the stock takeoff parts. That includes wheels, stock super charger, stock takeoff parts This also come with a Viper alarm that has a one mile range. Lastly, this baby has lived in a climate controlled garage and been started at regular intervals when not driven. Fluids changed yearly and tread on tires is like new.
eMail me for more details : hulsebusdumtoivo@yahoo.com