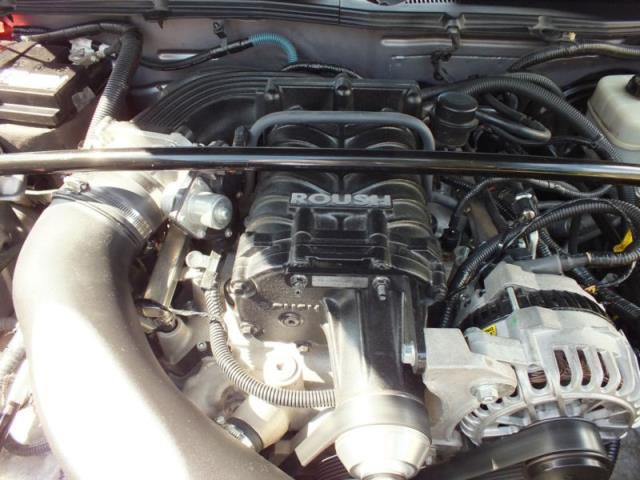 I bought this as a salvage car and it had minor front end damage (no frame), looked like it hit a pole at very low speed and set off the driver side airbag, I bought it to turn it into a Shelby GT 500 Clone and if you deceide to put in the 5.4 motor you will have a GT500 as I installed all the other parts and bodywork. To repair the car I had to replace the front bumper, hood, grill, radiator, driver side airbag, seat belts, 1 headlight and the airbag sensor. All of the repairs were done by a professional repair center Color Concepts in Zionsville Indiana, they repainted the entire car as you can tell by the pictures they did a great job. There was zero frame damage and even the horns were untouched, have a mechanic verify. The new parts I bought and had installed to turn it into a GT500 clone include but are not limited to and OEM hood, bumper, headlights, grill, rear bumper, seat covers, rocker panel, springs and struts (full suspension package), instrument custer (bought 2 weeks ago), wheels and tires, Shelby manuals, Bembro brakes and rotors, all aluminum radiator, front and rear spoiler, OEM seat belts, mats, and a Shelby airbag etc. Bought the car for $11K and have almost $19K invested in it, which means sombody will get a hell of a deal. I also had installed a roush supercharger, an alumimum driveshaft, OEM nav system and aftermarket cans. This is one scary fast great sounding muscle car. Gets lots of attention. The only thing I know thats wrong with the car is that one of the tire sensors is malfunctioning. Why am I selling it? the answer is that I dont use it enough and it is sitting in my garage. I also have other toys. Check out my feedback it is perfect, please if you do not have the money do not bid. Thanks for looking and bidding