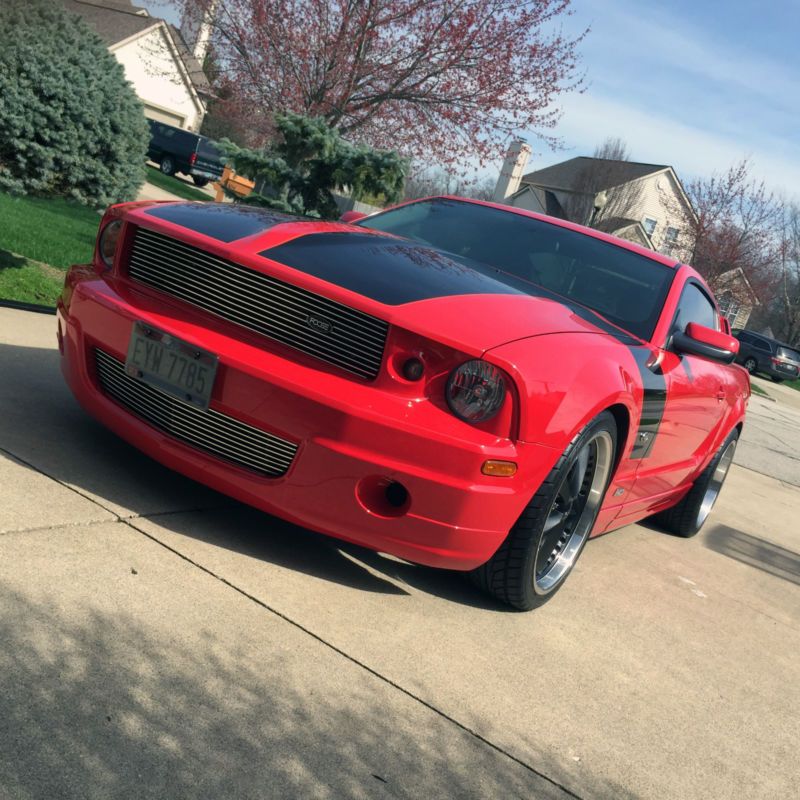 2006 FOOSE MUSTANG STALLION
WITHOUT QUESTION THIS 2006 STALLION IS DESTIN TO BECOME A FUTURE COLLECTABLE. WITH LESS
THAN 285 KNOWN TO EXSIT, 54 PRODUCED IN 2006 (THIS BEING #31 AND ONE OF THE FEW SIGNED BY CHIP) AND THE BALANCE IN
2007, BEFORE PRODUCTION
WAS HALTED, DUE TO A FALLING OUT BETWEEN CHIP AND UNIQUE PERFORMANCE WHO WAS DOING
THE MODIFICATIONS.
THE CAR HAS LESS THAN 21,000 MILES ON IT, NEVER RACED AND HAS BEEN MAINTAINED MECHANICALLY BY
ONE OF THE TOP TUNERS HERE IN OHIO AND COSMETICALLY MAINTAINED BY ONE OF THE TOP TEN DETAILERS IN
THE NATION, AND IT SHOWS. ALWAYS GARAGED IN A CLIMATE CONTROLLED
GARAGE, UNDER A CUSTOM MADE CAR COVER THAT FITS LIKE A GLOVE.
DRIVEN AND BABIED BY ME ONLY, MAINLY TO CAR SHOWS, IF TROPHIES AND AWARDS ARE YOUR THING THERE ARE PLENTY THAT WILL
GO WITH THE CAR.
I HAVE ALL THE ORIGINAL PARTS THAT HAVE BEEN TASTEFULLY AND PROFESSONALLY REPLACED.
THE MUSTANG NOW WEARS A POLISHED STAGE ONE KENNY BELL SUPERCHARGER (MAYBE 500 MILES SINCE INSTALL)
WITH CUSTOM INTAKE, PRODUCING 450 HP TO THE REAR WHEELS, SHORTY CERAMIC HEADERS, HOT ROD CAMS.
INSIDE A NEW CLARION DVD, CD, GPS UNIT HAS BEEN INSTALLED.
THE CAR IS NOT A MUST SELL FOR ME AND IM VERY HESITENT TO LET IT GO, BUT RETIREMENT
IS AROUND THE CORNER AND ITS TIME FOR SOMEONE ELSE TO ENJOY AND APPRECIATE.
IM SURE THERE ARE SOME THINGS I'VE MISSED SO PLEASE DONT HESITATEC PILLAR SCOOPS, ROCKER AND DOOR CLADDING, FOOSE
EDITION CAST WHEELS, FOOSE LOGO EMBROIDERED FRONT SEATS, FOOSE LOGO MATS
FOOSE CUSTOM INSTRUMENT CLUSTER, LEATHER CONSOLE LID, CUSTOM SILL PLATES, CUSTOM COIL
SPRINGS FRONT AND BACK, HIGH PROFORMANCE STABILIZER BARS FRONT AND REAR, CUSTOM
STRIPES HOOD FRONTFENDERS, HOT ROD HUES FINISHES BY DUPONT.