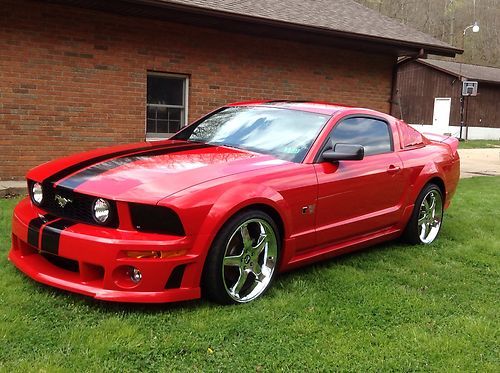 For sale, My 2005 Jack Roush Edition Mustang.I purchased this car in late 2005 from Lance Cunningham ford in Knoxville TN. The dealer had installed for me a Vortec V2  Super Charger and inter cooler. Also had a set of 20 inch Cobra Wheels with a set of 255/35/R20 set of tires and tinted the door glass.Car has been Garaged kept since new and has never been smoked in,Car currently only has little over 7500 miles and still shows in excellent condition. There is a small curb mark on two of the wheels that really is only noticeable when polishing them,and couple pin head sized stone chips on the front clip .The front tires are around 40 to 45 % tread life.The rear tires different story they most likely wont pass state inspection this year so I just ordered two new tires for the rear.So the car will have brand new rubber on rear when sold not the ones in the photos. The Harley Davidson Decal can be easily removed if buyer doesn't like it .I purchased this car for up around 50 grand and this is a chance to own this awesome car for around half that price Carfax shows this as a corporate vehicle that is simply because I titled it in my company name for insurance purposes  .With this car pushing in the neighborhood of 450 horse power it has the looks and  the power to turn heads or to pin them to the head rest. Any