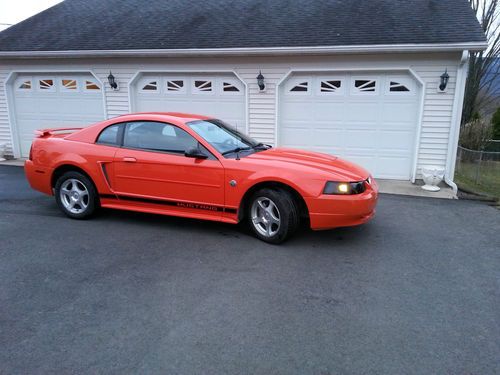 Up for sale is a 2004 40th anniversary orange mustang. It has only 68,XXX miles. Charcoal interior and automatic. It is a V6 premium coupe and has some upgrades with the original parts as well. Like new Pirelli tires and driver seat is electric. THIS CAR WAS GARAGE KEPT. I have the original manuals as well. It has a cold air intake, and projector headlights with halos. It comes with the original headlights and a new OEM headlight.s Also it comes with the original air intake. It has the mach 460 sound system but it was changed to a new head unit, 4- 6x8 kicker speakers and a 10" 500 watt sub in the back. The new head unit has bluetooth as well. The original stereo does work and can go back in if wanted. The grill lights up blue with the flick of a switch. I added chrome bezels around the gauges. It has all weather matts in the front as well as the original matts. The interior is in great condition and is smoke free. It drives nice and strong mechanically and never had any problems since I had the vehicle. Come and test drive the car. No one has ever smoked in this car.

Questions people asked:
Reason for selling?
I am going to college
Why buy this?
Rare orange color and will make you stand out. People will turn heads to see this car. Turn key and clean all around.].
Tire life?
Practically new when i bought the car 62,000 miles. I only put 6,000 miles on the car in those 2 years and the tire treads are still thick. You wont need tires for a while.
Interior condition?
The interior has no tears or stains. It is in very good condition.
Any dash or warning lights?
No warning lights on the car and i have never seen any light up.
You can contact me on my cell any time at: 570-560-3597.