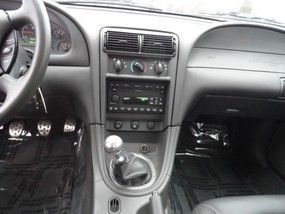 This is a 2001 Bullitt Mustang with only an amazing 1200 original miles, this is one of only 2800 produced Bullitts.  The car has a mach 460 sound system and car is very beautiful, if you are looking for a mustang and are a mustang enthusiats you will appreciate this car and understand the uniqueness of this machine.  We do reserve the right to sell offline while auction is in duration.