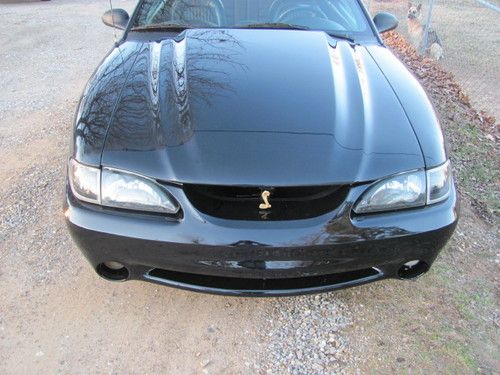 Hello I have a 1994 svt cobra #4086 drive completely rebuilt by a pro builder I have replaced almost every part on the car all with less then 200 miles I do have the paper work here is a few of the new parts clutch kit,power steering pump,all mounts alt, water pump,fuel pump,relay box ccom, trans.I also hade the cirvini cobra r hood repainted along with the front bumper cover it had rock chips.The car was not wrecked all body parts have the correct vin it has eibach springs new struts, caster camber plates,hurst shifter,the wheels are 2003 svt cobra wheels 18s with tires at 80% one wheel will have to be replaced. the interior is black and saddle the front seats are from a 2002  bullet.car runs vary well any more info wanted call 479-430-4335.