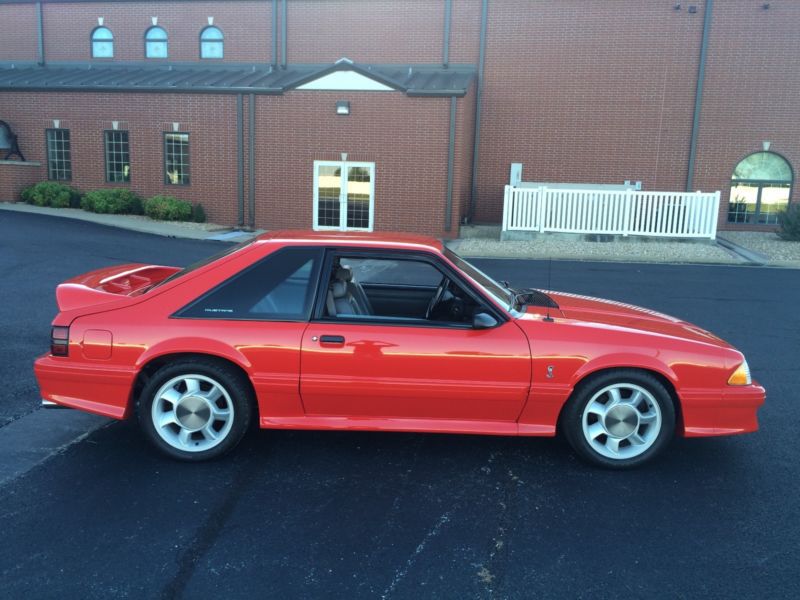 For more details email me at: latanyalddiedricks@highsociety.org .

1993 SVT Cobra Mustang #3356
Red exterior with gray leather interior no sunroof car, 49k original miles and a really nice presentable car that
you can be proud of at any mustang event.This car has been well cared for and preserved meticulously over the
years,even though it is 23 years old the paint still has great depth,the trim and body moldings still look new,and
after 49k miles during its life the underside is almost as clean as the outside.It is always garaged and covered
when not attending shows,and maintained as it should be.
The cobra does have some basic mods,some performance and some just cosmetic but I do have most of the stock parts
that were taken off.Here is a list of things that have been upgraded:
Suspension- lowering springs H&R springs on the front with Eibach springs on the rear,KYB shocks and struts,Maximum
Motorsports caster camber plates to align the car,rear upper and lower control arms w/poly bushings,subframe
connectors,and a strut tower brace in the engine bay,along with brand new ditto 555's on all four corners.The car
handles great for a fox and still rides great.
Performance- aftermarket exhaust, shorty headers,h pipe,mac mufflers exiting through 3" magna flow tips. Steeda
short throw shifter,ford racing aluminum driveshaft,rear gears,c&l intake tube,pro-m mass air meter,ford racing
plug wires,fluidyne aluminum radiator and a electric fan set up. All this just gives the car a nice feel of power
and the legendary fox mustang sound.
There are a couple of things that I can nitpick about the car like the car has had the hood repainted at some point
to remove a few rock chips,but the shop didn't get them completely sanded out and over time as the paint has shrunk
they have become visible if you look very closely,the window switch on the driverside for the passenger window
operates backwards,the factory ford radio has never worked since I have owned the car,and the air bag light started
flashing last fall when I was putting the car in storage for the winter.(flashing code 34)
Overall this is a very nice well kept well documented 1993 cobra mustang ,All vin tags are in place,and car will
come with a folder of documents including the SVT paperwork,window sticker,etc.I