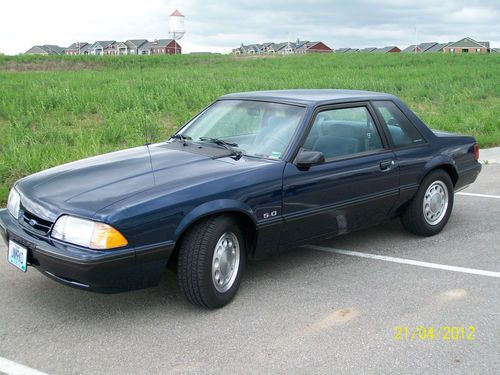 Up for sale is a 1991 LX Mustang with the 5.0 engine Notchback coupe.  This is a former SSP Mustang, that has been restored as it served with the Santa Clara Sheriffs Dept. in California.  UNIT # 91054.  IT is an automatic coupe with 46,308 original miles and was used by the DA office.  It has no rust and was painted in the original MK Twighlight Blue, the seats were redone, alone with NEW NOS quarter windows, door and trunk moldings.  The gauges and bezels were redone along with having the wheels redone and new NOS Goodyear Eagle GT's installed .  New NOS Headlights and taillights were installed, the transmission was serviced  and oil was changed and it cares a Missouri State inspection.   All the power windows and lock switches were replaced with NOS parts.  This car runs and drives very strong.  I have over $12,000 in receipts on this car and lots of documentation and a Carfax on the history.  The Carfax report will show the car at auction in California having 91054 which is in correct as someone entered the units ID number from California.  There is a paper trail of owner documentation to support this along with copies of previous owners titles.  The buck tags are present on this car and sales includes most of the original Police Equipment many pieces very rare and, pictures and all documentation.  An Appraisal letter lists the cars value at $18,000.


If you like Mustangs, need a turn key vehicle this is it.  This car gets a lot of compliments and the paint is flawless.  I showed this vehicle at the Des Monies, Iowa MCA National Show in 2011 receiving a GOLD in Concours Driven.

This car is listed locally and auction can end at any time.  Car is located in the Kansas City, Mo. area.  Winner is to pay $500.00 non refundable deposit at the end of the auction and must contact me within 24 hours  to make final arrangements.  If you come to see the vehicle and feel it is not what I have represented, I will gladly refund your deposit.  The car is available to review and drive anytime.  Car does not leave until all money has cleared.  Thank you for bidding and good luck.  Shipping or transportation is the responsibility of the buyer.