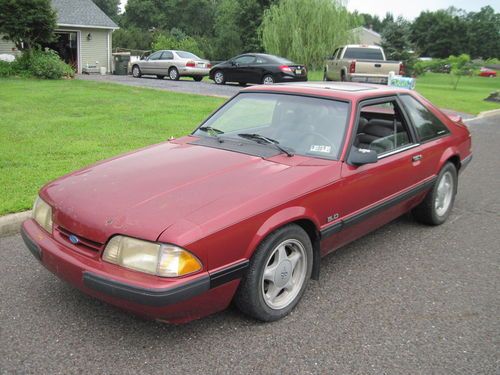 THIS IS A 1991 MUSTANG LX HATCHBACK 5.0 5 SPEED.  I BOUGHT OFF EBAY A WHILE BACK THINKING I WOULD HAVE TIME FOR A PROJECT. WELL THAT DIDNT HAPPEN. ITS JUST SITTING IN THE GARAGE TAKING UP SPACE. MY LOSS COULD BE YOUR GAIN. THIS IS A 1991 FORD MUSTANG LX 5.0 5 SPEED CAR. THE CAR ISNT IN BAD SHAPE, BUT ISNT IT GREAT SHAPE. ITS ALL ORIGINAL AS FAR AS I COULD TELL UNMOLESTED. IT HAS HEADERS, AFTERMARKET DUAL EXHAUST,SHORT THROW SHIFTER, 3.73 POSI, NITRIOUS (ISNT HOOKED UP). THE CAR RUNS AND DRIVES GOOD. IT HAS A COUPLE OF ISSUES. IT POPS OUT OF REVERSE, THE GUY I BOUGHT IT FROM SAID ITS THE SHIFTER HE SAID I DIDNT POP OUT WITH THE ORIGINAL SHIFTER BUT I DONT HAVE ONE SO I DONT KNOW. IT SMOKES AT IDLE BUT HE SAID THERE WAS SOME VACUMM LINES MISSING WHICH I DID NOTICE. IT HAS SOME RUST IN THE LEFT QUARTER I INCLUDED A PICTURE. THE DOOR PANELS ARE A LITTLE LOOSE AND THE SEATS ARE STAINED. THE RIGHT FENDER HAS BEEN REPLACED AND PAINTED WITH A SPRAY CAN. THIS STUFF MAY SOUND LIKE THE CARS A MESS BUT IT REALLY ISNT. I PAID WAY TOO MUCH FOR IT. IM LISTING NO RESERVE WINNER TAKE ALL SO GOOD LUCK PLEASE ANY QUESTIONS PLEASE FEEL FREE TO E MAIL ME. THIS CAR IS BEING SOLD AS IS WHERE IS. PLEASE ONLY BID IF YOU INTEND TO BUY.