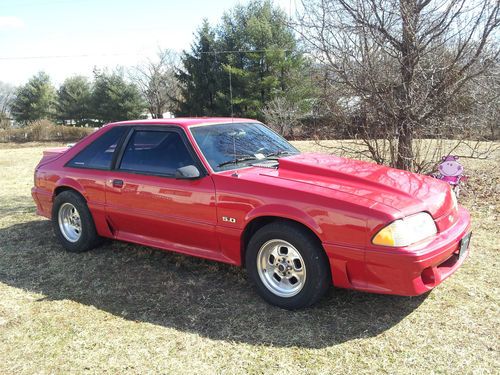 1990 Ford Mustang GT, 331 Stroker, 351 Windsor Heads, 1.6 Comp Cam Ultra Gold Aluminum roller rockers, Holley 750 Double pumper carb, Eldebrock rpm hi rise intake, msd plug wires, cam (not sure what size but sounds good), 5 speed transmission, new clutch, throw out bearing, pilot bearing, and flywheel, 373 gears in rearend, hi flow fuel pump mounted outside the tank, BBK shorty header, BBK H-Pipe, flowmaster mufflers, no tailpipes, red exterior in good condition with a little clearcoat peeling on just the bumpers, 3 rust spots just starting (pictures included), black interior in really good shape, 5 inch tach, 3 small gauges for battery, oil pressure, and temperature, electric fan, push start with 3 switches installed for fan, fuel pump and ignition, cowl induction hood, weld rodlite rims, Mickey Thompson street slicks on rear, CD player, good inspection, no A/C, but it does have heat. I recently bought this car under the assumption that the one I was going to buy was sold but after buying this car I found out the other buyer for the other car I wanted backed out so that is the reason I am selling this one. The car does run good with lots of power but it is a used car so it is not in brand new condition. It has a slight miss under constant speed but it is do for a tune up and Im pretty sure the timing needs to be adjusted slightly, and the speedometer cable needs to be hooked up in the back of the instrument cluster. Also undercarriage is in good shape, no rust! If you have any questions feel free to ask. Thanks for looking and Happy bidding!