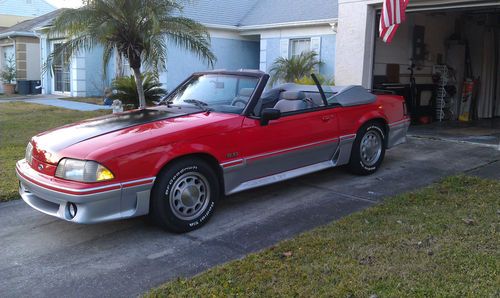 1988 Mustang LX/GT Convertible. I drive it daily and work at a Ford dealer, where I have it serviced!. The new stuff includes the following...

This is a VERY Tight and strong Fox. 100% Stock. No goofey aftermarket stuff. It drives excellent, tracks straight down the road, and is very fast. Absolutly no rattles, Ice cold a/c, No tears or rips in the interior. No Musty convertible smell as it has always been garage kept. Paint is presentable as shown in the pictures. Power Top is weathered as shown but no leaks, has a Glass rear window and works great. Clean Carfax with NO accident history! NADA Value $8800 Reserve is very low concidering the book value, and what I have put in it, and I have WAY MORE IN IT! This is YOUR chance to get a fast fun and safe Fox Body you can start driving NOW. Must sell, starting another project! Sold as is where is, pick up only.