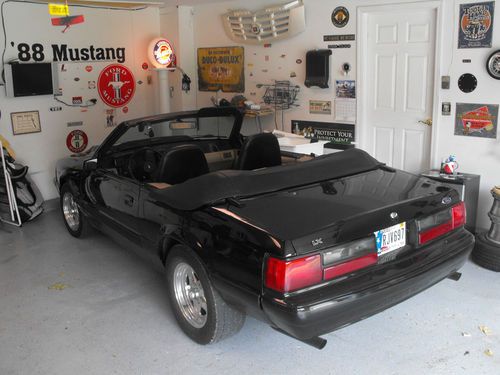 Condition: UsedA vehicle is considered used if it has been registered and issued a title. Used vehicles have had at least one previous owner. The condition of the exterior, interior and engine can vary depending on the vehicle's history. See the seller's listing for full details and description of any imperfections.Seller Notes:"Only issues I know of with the car are:electric seats not hooked uprear plastic window not perfectelectric trunk opener not hooked upelectric gas door not hooked upair conditioning not blowing cold"

This is an awesome car.  Have the urge for a winter project and no garage space so need to sell one of my babies.  Going to list all the things I have done since getting the car.  I listed all I could think of that is wrong with the car.  I have never driven it in the rain, but would guess it is like any other convertible of this type and it may leak some.  Also have listed all the things I have done to the car to make it a real beauty.  We had one of these years ago and I just wanted to save it and make it a gem.  Here is what I have done...
-new front bumper covers
-new front fenders
-new hood (scoop)
-new hood pins
-new graphics
-quarter panel repair on both sides (steel)
-new boot
-new trunk lid
-new door handles
-new rear window motors
-all electric windows work
-new hydrolics for top
-new custom wheels (all original wheels go with car as well as a new spare tire mounted on one of the original rims)
-new interior
-new paint
-top nearly new
-had engine checked over by my mechanics
As you can see, I have several thousand dollars invested, not including labor.  I would be happy to answer any questions you might have.  She is NOT perfect, but sure not far from it.
In case the negative stuff didn't show up, here is what I know...
-electric seats not hooked up
-rear plastic window not in perfect shape
-electric truck opener not hooked up
-electric gas lid opener not hooked up
-air conditioner not blowing cold (just tried it for the first time today...I never use it)
Buyer will be responsible for shipping.
$500 dollar non refundable deposit will be required through Pay Pal at end of auction.  Remaining dollars must be via cashier's check (title released after check clears) or bank wire transfer.