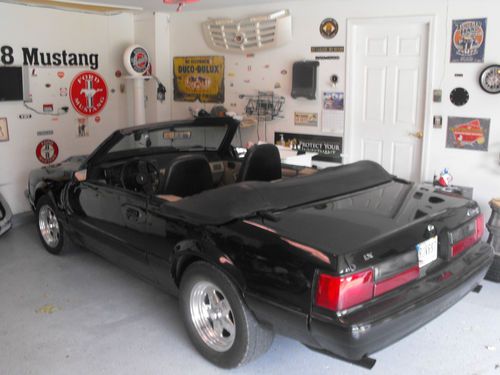 Condition: UsedA vehicle is considered used if it has been registered and issued a title. Used vehicles have had at least one previous owner. The condition of the exterior, interior and engine can vary depending on the vehicle's history. See the seller's listing for full details and description of any imperfections.Seller Notes:"This is an awesome car! I had it listed once before and have dropped the reserve because I just purchased another car ((Jaguar) and I am out of garage room. The good and issues are listed below."

This is an awesome car!  I had it listed once before and have dropped the reserve because I just purchased another car ((Jaguar) and I am out of garage room.  The car has been nearly totally re-done.  It has the following;
1.  new front fenders and front bumper covers
2.  new rear window motors
3.  new interior
4.  new professional black paint job
5.  new boot
6.  new hydraulics on convertible top
7.  new hood
8.  new trunk lid and lock
9.  new custom wheels
10.  rear quarter panels repaired
Also have the original rims and center covers which will go with the car.  Also have two extra front fenders (vendor sent me two extras when I bought the first two) you can also have if you want.
I took the car to my mechanic when I first bought it and they checked it all over and could find no problems mechanically.  I would be happy to give you their number and you can call and ask any questions.
I did not put a new top on because the one is nearly new that is on it.  Exhaust is good, clutch and transmission are sound.
Issues:
I have never had the car in the rain, but would guess the windows would need to be adjusted if you were going to use as a daily driver.  I am a car collector so I have never driven the car in the rain.
The rubber trim on driver's side window may need to be replaced.
Power seats not hooked up...they are manual.
Power gas lid deactivated.
Power trunk lid deactivated.
On the car fax you will see a minor front end accident.  That is why I replaced the entire dog house.  The only damage was on the passenger side front bumper cover, but I replaced both fenders as well as entire bumper cover so I knew everything was OK.
I am sure I have forgotten some of the improvements I have made.  I will never get back the money I have invested, but I realize that.  I bought this to fix up and restore for my oldest son and now he has decided when I kick off he would rather have the Jaguar.
The car will also be listed locally and I reserve the right to sell locally.
If you have questions or need more pictures you can contact me through Ebay.
Shipping will be the responsibility of the buyer.