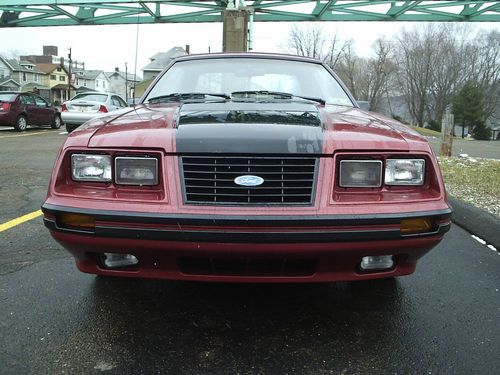 I have a great find here, 1984 Ford Mustang GT, nicely equipped with factory T-tops, power windows, locks and cruise control.  It has a 5.0 litre V8 and paired with a 5 speed manual transmission.  It has a clean title and miles are actual.  This is a very collectible vehicle and ready to enjoy.  Look at the vehicle history report.  Please note that I only sell vehicles with this username.  I try to accurately represent my vehicles to the best of my abilities.

Exterior:  The pictures show it well, no visible rust, only minor paint chips.  There is some slight surface rust starting on the bottom of the doors and at the dog leg where the door closes.  All glass and lenses are nice.  T-tops did leak a little during that last major rain storm.  Also included is a car cover.  Overall, it is in great condition.

Interior:  Its nicer than the exterior.  Some brittle plastic pieces (trim pieces) and some vinyl missing in the dash where the speaker is.  Clothe is excellent and carpets are clean.  All options work, windows, locks and cruise.  Overall, it is in amazing condition.

Mechanical:  Runs and drives as it should.  Lots of power, strong clutch and transmission.  Sitting on four newer matching tires 80% + tread.  It is not currently inspected but should pass without concern, about 100 miles since last inspection.  Well maintained, this one had a good owner.