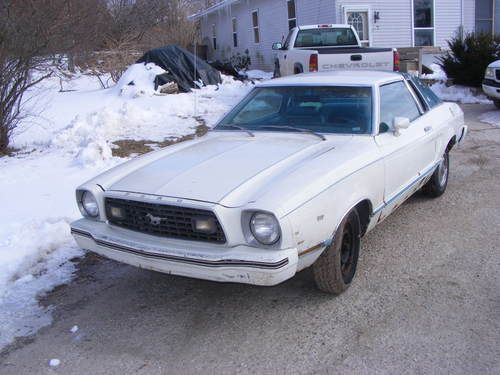 Condition: Used: A vehicle is considered used if it has been registered and issued a title. Used vehicles have had at least one previous owner. The condition of the exterior, interior and engine can vary depending on the vehicle's history. See the seller's listing for full details and description of any imperfections. ...
1978 FORD MUSTANG II  66096 MILES

THE CAR HAS BEEN SITTING A LONG TIME AND I NOTICED SOME MOUSE DAMAGE TO THE WIRING, DID TEMP REPAIR ON DISTRIBUTOR WIRES

I DID GET IT RUNNING BY PUTTING GAS IN CARBURATOR, IT FIRED RIGHT UP AND SMOOTHED OUT GOOD, NO KNOCKS OR RATTLES, JUST A EXHAUST LEAK

THE STARTER OR SILINOID HAS SINCE QUIT WORKING,,ONLY CLICKS NOW, PROBABLY EASY FIX BUT I'M NOT DOING IT

DON'T KNOW ABOUT THE TRANSMISSION CONDITION, I THINK IT WILL BE OK, BUT I DID NOT GET A CHANCE TO DRIVE IT

IT HAS SURFACE RUST AND A COUPLE MINOR DINGS, DON'T SEE MUCH OF ANYTHING RUSTED THROUGH

I HAVE IGNITION KEY AND TRUNK,DOOR KEY

I DON'T SEE ANY PARTS MISSING AND BELIEVE IT IS THE WAY IT CAME FROM THE FACTORY, NO BATTERY

I SET THE RESERVE AT $1200.00 I'M SURE IF YOU PIECED IT OUT YOU COULD TRIPLE THAT ON PARTS ALONE