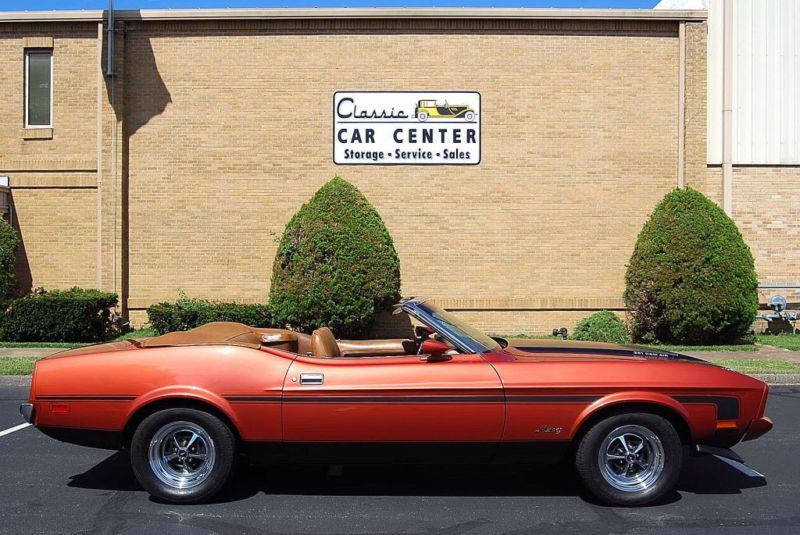 If you have questions email email me at: montemnniglio@lagerlouts.com .

A Rare Find—a fully-equipped ’73 Mustang Cobra Jet Convertible
The “Q Code” Cobra Jets are always the most sought-after Mustangs, and the 1973 4-speed convertible we have for
sale is one of those rare cars. This fully-restored Mustang is equipped as follows:
· A true “Q code” car with a “Q” in VIN
· Marti Report
· 35l Cobra Jet engine with functional Ram Air
· 4-speed Hurst top-loader transmission
· Traction-Lok differential
· Competition suspension
· Air conditioning (that blows cold)
· Front disc brakes
· Tilt wheel
· Power: windows, steering, brakes, antenna
Great Looking
· Paint and Chrome
Resprayed in Medium Copper Metallic, this car’s finish looks like new as one would expect for a car that
underwent a full restoration.
The chrome is extremely nice as is the stainless trim.
The black convertible top looks as new and the power top mechanism works flawlessly.
· Interior
The Ginger Knitted vinyl interior upholstery was all redone and looks like new. The door panels are excellent as
is the carpeting. The dash and instruments are in excellent cosmetic condition and the instrument package includes
a tachometer.
· Engine
This 351 Cobra Jet engine was rebuilt during the car’s restoration, adding a mild cam to increase performance.
During restoration, a factory-original Ram Air System was incorporated. As mentioned, the car is a “Q-code”
car as verified by the VIN plate.
· Transmission
The four-speed fully synchromesh transmission operates correctly and makes this car a pleasure to drive. It is a
Hurst top-loader transmission that is smooth as silk. The Traction-Lok differential insures that the engine’s
power makes it to the pavement.
· Chassis
The underside of this Mustang is remarkably clean for a driver, suggesting that it has seen little bad weather. It
appears to be free of any visible rust or corrosion other than surface rust and a small hole in front of the left
rear tire.
· Safety and Comfort features
The car has front disc brakes, a front anti-sway bar and competition suspension, all of which contribute to the
Mustang’s stability. Seat belts provide for additional passenger safety.
All of the safety and accessory features work—lights, turn signals, wipers, horn, etc. except for the backup
lights and dash lights. All of the instruments are in very good cosmetic condition and work. The instrument
package also includes a tachometer and a clock—both of which work. The four 15” Magnum 500 wheels are fitted
with BF Goodrich Radial T/A 235/60R15 tires that look almost new.
The factory air conditioning works properly as do the four power windows and the power top.
There is a front spoiler and a racing-type gas filler cap on the rear.
An Extremely Nice Example of a Rare Q-code Mustang Convertible
This is a performance Mustang that has no “issues”. With a Cobra Jet engine and a Hurst 4-speed, it looks,
performs and excites like it did back in 1973 when it came to U.S. showrooms. Equipped with all the power and
comfort equipment one could wish for, it is an impressive car at the cruise-ins, car shows or just driving around
your home town.