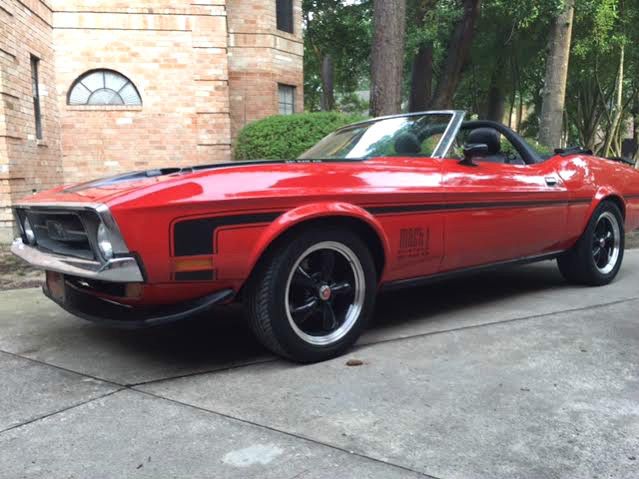 I am always available by mail at: cecilcccunniff@ukso.com .

Gorgeous 1972 Mustang Convertible for sale. This Mustang has been beautifully restored to be a great
representation of the classic 70's muscle cars. It is powered by a 351 cubic inch Cleveland V8 engine with a
functioning Ram Air. This is backed up with a block V8 3-speed automatic transmission. The Mach 1 title adorned
performance with their classic simulated NACA hood scoops. It has a brand new 4 barrel Edlebrock corroborator.
Add in A/C, power brakes and power steering and you have one fun and easy cruising classic car. The exterior on
this 1972 Mustang is a throwback shade of vintage red and classic black. Complimented by a new power black Vinyl
top which sits perfectly over the custom roll bar. This Mustang has just the right amount of chrome and trim
pieces to catch everyone's attention. The interior is immaculate with vinyl seats. This Mustang has lots of
extras including customized new front and rear spoilers. This Mustang is also sporting a new exhaust. Weather
seals are new on both the doors and the trunk. Additional options on this 1972 Ford Mustang include: A/C, AM/FM,
radio, seat-belts, vinyl interior, automatic convertible top, power brakes, power steering, and steel wheels with
new tires. There are 88,000 miles on the odometer; however, they are not accurate miles. This is your chance to
own the classic cruising convertible you always wanted.