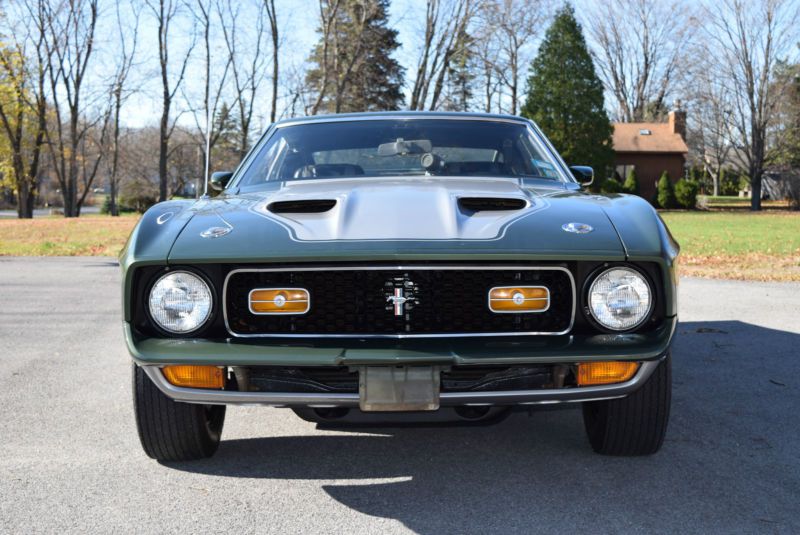 If you have any questions feel free to email: kristiekffogelman@ukscientists.com .

Up for sale is the culmination of a two year restoration on a classic muscle car. This 1971
Ford Mustang Mach 1 is a no excuses example of a survivor quality car that was attended to where it needed
attention and was left alone where it needed to be left alone to ensure its originality was not compromised. This
car checks all the boxes and goes over the top when it comes to paperwork and documentation. Please read on to
appreciate what this car is and how rare it is.
BASIC VIN BREAKDOWN:
1 - 1971
F - Built at Dearborn
05 - Mustang Mach 1 Sportsroof
J - 429-4V CJ Engine Ram Air
196087 - Sequence number
DOOR TAG:
Body - 63R - Mustang Mach 1 Sportsroof
Color - C - Dark Green Metallic Paint, FORD #3542-A
Trim - 5A - Black CLarion Knit/Corinthian Vinyl Bucket Seats
Axle - A - 3.50 Conventional Axle
Trans - 6 - Four-Speed Close Ratio Manual Transmission
DSO - 12 - Buffalo Ordering District
First and most importantly this car is a one owner car. It was purchased at Koerner Ford in Yorkville, NY on May
6th, 1971. The original owner drove, cared for, and enjoyed the car until the early 1990's when the car was parked
due to a carburetion issue. Unfortunately once the car was parked in the garage it fell further and further down
on the priority list for the owner as life got in the way and it was never brought out on the road again. The car
retains all of the original paperwork including the original bill of sale (which is in amazing shape and can be
seen in the photographs below),