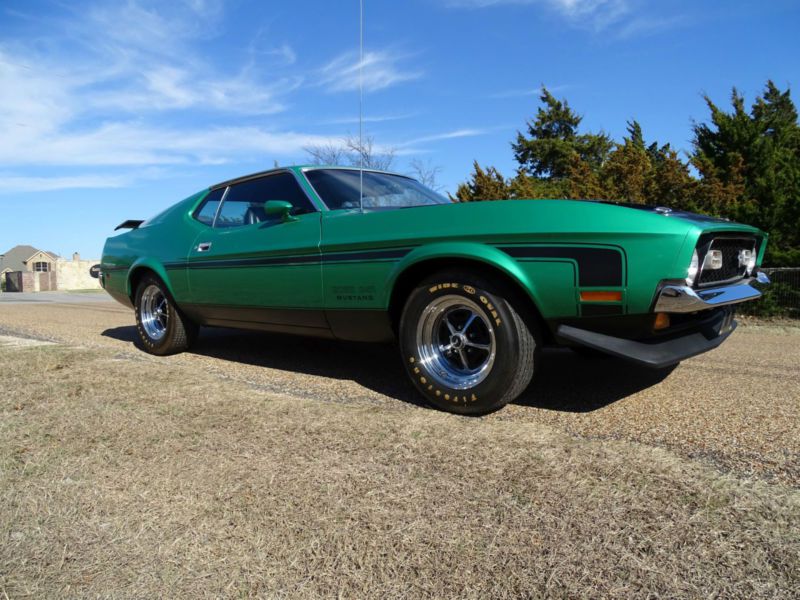 Feel free to ask me any questions about the car : sena.rensch@toothandmail.com .

Ford 351 BOSS Mustang
Vehicle Specifications
VIN: 1F02R201442
Grabber Green Metallic Exterior
Black Corinthian Vinyl Interior
48,693 Original Miles
NCA Gold Rotisserie Restoration
All Matching #'s Car incl motor
Original Body, All matching #'s
Deluxe Marti Report Included
Fully-Optioned Car (See List)
1/19 with these Trim Codes
Options, Extras, and Vehicle Condition
Originally
scheduled for build on May 6, 1971 she was actually built 3 days ahead of schedule on May 3rd, 1971, in Dearborn,
Michigan. This car is 100% original: the frame, body, floorpans, engine, interior, badges, everything. The car was
professionally restored to NCA Gold standards and has been stored in a climate controlled facility its entire life.
This is one of the nicest, most well-optioned Boss' out there! Marti Report statistics state this Boss is one (1)
of nineteen (19) Cars built with these Paint/Trim codes! Only 100 of these cars ordered from this DSO, this car is
extremely RARE. Originally slated for export, this car stayed stateside and has since had a rotisserie restoration
by its previous owner to solidify its place in time and history. This car is EXTREMELY RARE! Not to mention, this
Boss is absolutely LOADED with options, probably a good reason Ford wanted it back so badly! The original invoice
shows it was sold back to Ford because it has so many options, Ford wanted it as a display. This is a 100% numbers
matching car with numbers stamped on the engine, transmission, and rear end. The car also has the ORIGINAL AutoLite
Boss 351 Carburetor. Also has its ORIGINAL distributor, fuel pump, & rev limiter as well. The car has retained
most all original parts, those replaced were done so with only NOS parts.
We have the ORIGINAL build sheet (most of it) as well as the ORIGINAL Window sticker for the car Datails on Window Sticker:
Standard Equipment:
351 CID 4V HO 8 CYL Engine
Four-Speed Manual Transmission w/ HURST shifter
3.91 Axle/Traction-Lok Diff
Power Front Disc Brakes
Dual Ram Induction Option
Competition Suspension including Staggered Rear Shocks
Instrumetation Group
Special Cooling Package
Color-Keyed Racing Mirrors
Grille Sportslamps
Trim Rings/Hub Caps
High Back Bucket Seats
F60 Wide Oval B/WL Tires
Steel Guard Rails
Options Include:
Grabber Green Metallic
Mach I Sports Interior Group
(4) F60 X 15 Wide Oval Belted BSW Tires/Raised White Letters
Covenience Group
Power Steering
Rim Blow-Deluxe Steering Wheel
Sport Deck Rear Seat
Rear Window Electric Defrost
Stereosonic Tape System
AM Radio
Intermittent Windshield Wipers