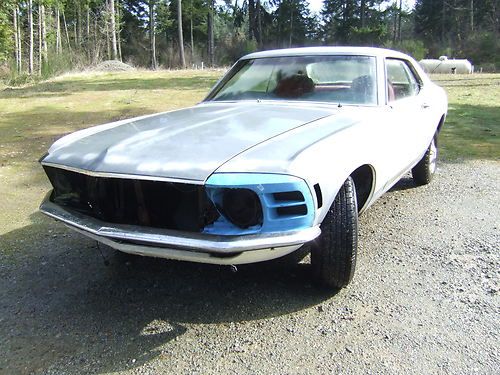 So I bought this coupe to use for parts for my convertible, decided to sell the convertible no longer need the coupe. The 250 straight six has about 10 miles on a rebuild it starts right up and runs well it's cold blooded though it's been sitting for a while may just be bad gas. As you can see in the pictures it's a work in progress. There's some bondo in the panels not a whole lot though. The lower quarters are actually very solid the worst spot on the whole car is the driver's side torque box and driver side floor pan and they're not all that bad easy fixes I've included pics of both. The dash is in nice shape it has a couple cracks, the rest of the floors are solid and need carpet. The radio still works. It needs a new headliner. The taillights are in the trunk witch is also solid. This would be a very nice project to work on while driving it, or yank the 6 and drop a nice 351 in there! A six cylinder will get way better gas mileage! The car was originally white, I have a clean clear Washington State title in my name for it. Low starting bid for a car that runs and drives. Automatic c-4 transmission, power steering drum brakes. The guy I purchased the car from got primer on the chrome trim he wasn't very careful. The front hood on this car is very nice! The neutral safety switch needs to be adjusted, you have to push on the shift handle when starting. The underneath and wheel well areas other than what I mentioned before are very nice clean metal with undercoating. Please feel free to ask questions!