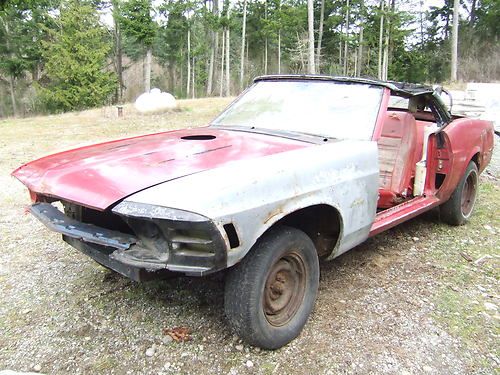 I'm selling my 1970 Mustang convertible, too many projects and this one deserves to go to a nice home! To start it is a major project, it needs full restoration many parts are missing the ones shown in the pics are included. She has rust but is solid in all the places that count. My fellow Mustang nuts know how rare a car 70 verts are I believe about 7000 were made. I have taken her apart down to just the shell so alot of hard work is out of the way! Red with red interior, power disk brakes, power steering, c4 tranny. Deluxe Marti report included. Clean clear Washington state title in my name in hand. Please feel free to ask questions. Also be sure to check out the 73 Cougar I have in another auction, lots of parts on that car would fit this one! Good luck don't miss this one low starting bid for a hard to find Pony!