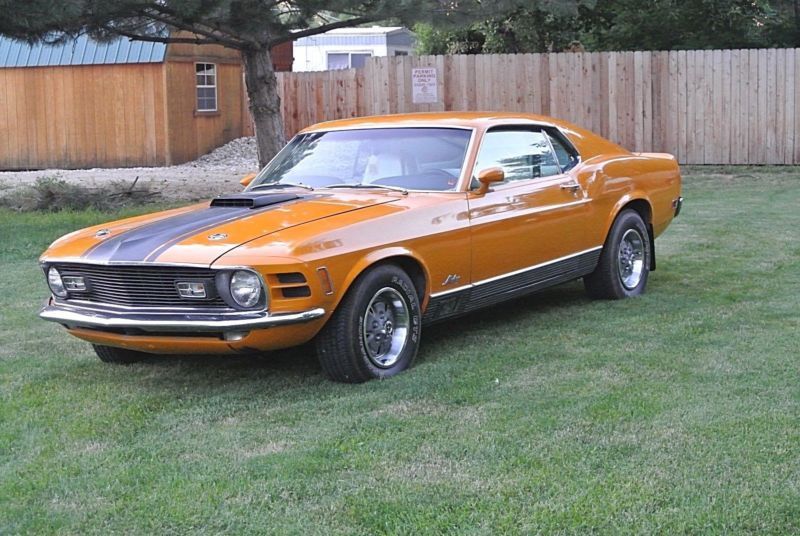 Headliner is in good to excellent condition
Has original AM push button radio
Round clock above the glove box
Dash has no cracks that run through it, only a couple very small cracks in the stock speaker holes.
Rear seats, arm rests and back window area are in very good condition.
Back passenger windows are all in very good working condition.
Vinyl on back passenger side just behind window by small curtesy light has a small tear.
All seat belts are in tact and working properly.
Floor carpet throughout are in good condition with only minor use wear and no holes.
Center console in tact and without damage.
Console storage compartment in good working condition and door opens and shuts properly.
Driver and passenger seat in good working condition with wear to vinyl on drivers seat.
ENGINE (ORIGINAL)
Cleveland 351 CID 4V V-8-300 hp; 4.30" bore x 3.50" stroke, 11.0 to 1 comp-ratio, premium fuel.
TRANSMISSION-Code 6 (ORIGINAL)
4-speed manual: close ratio sports-type w/hurst shifter
BODY -Code 63C (STRAIGHT) NO REPAIRS
-Mach 1 Buckets (ORIGINAL)
Shows wear from daily diving use, example minor door dings and small dent under the bumper on back right bottom
corner. Someone at a car show broke the antenna and did not manage to get it replaced.
EXTERIOR PAINT -Code U (ORIGINAL PAINT)
- Grabber Orange
INTERIOR TRIM -Code 3W (ORIGINAL)
-White, Mach 1 Knitted Vinyl bucket seats (ORIGINAL)-Needs some repair to the inside door panels and diver seat.
AXLE -Code 9
-3:25:1 Standard Differential