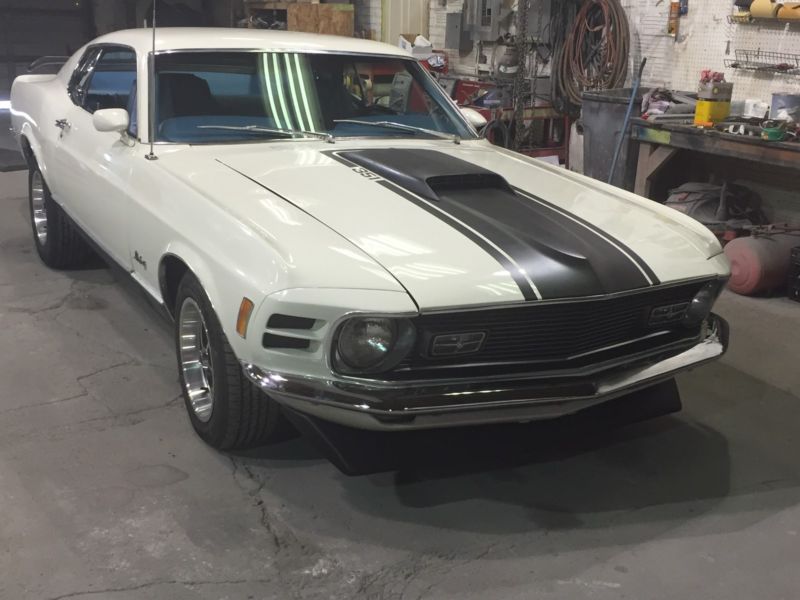 Please email me with any questions or requests for additional pics or something specific at: marya.camack@vfemail.net .

Although it has had new quarter panels, new floorboards and a new hood, the entire rest of the body is all original
Ford sheet metal that was in great shape. It is completely restored to its original Wimbleton white color with blue
interior which is completely reupholstered and new.
It has new magnum 500 wheels along with new 15 inch tires. It has a new fuel tank, new fuel lines, new brake lines,
all new brakes front and rear, new wheel cylinders, new calipers and rotors, all new brake hoses, New upper and
lower control arms, all new bushings, new strut bushings, new swaybar bushings, New shocks, new dual exhaust, New
front and rear spoilers, new chrome moldings, new bumpers, new carpet, new seat upholstery with new seat foam, New
door panels, new dash, reconditioned gauges, new headliner, new package tray, all new weatherstrip, and all
reconditioned wiring.
It also has an original 351 Cleveland 4-V engine along with a four-speed Toploader transmission and hurst shifter.
The engine has had all new gaskets, new timing chain, new oil pump and screen, new intake, new elder Brock
carburetor, New aluminum radiator, new battery, new belts, new alternator, starter, flywheel, new clutch, pressure
plate and throwout bearing, New U-joints in the driveshaft, reconditioned rear end, New radiator hoses, new fuel
hoses, reconditioned wiring in the engine compartment, all new lightbulbs, everything works and runs and drives
great.
This car has been taken down to bare metal, it has been prep and prime or three times, then it was sprayed with PPG
base coat and then for coats of clear coat were added to that. It has been wet sanded and buffed to a smooth glass
Lustre. The doors, hood and trunk Open and close perfectly in the body gaps are near perfect.
This car sounds absolutely superb, and it is a fast car!!!