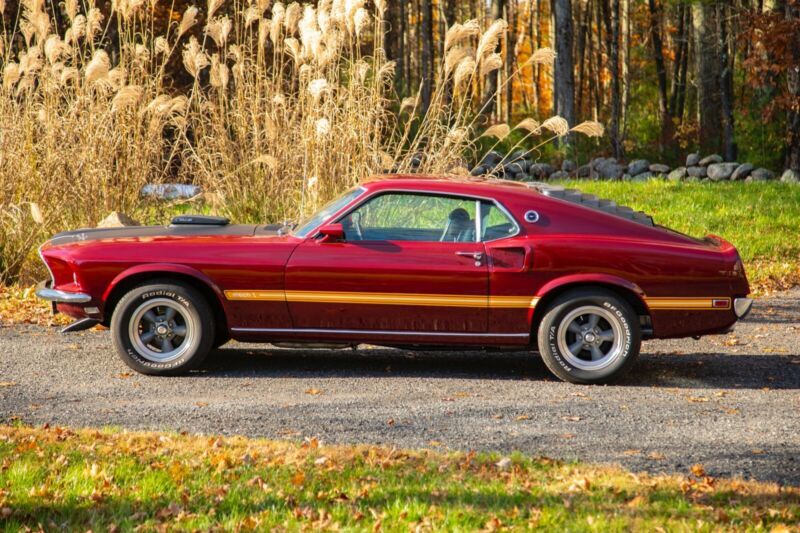 Very nice professionally restored 69 R-Code Mach 1 428 Cobra Jet. The car was born 50 years ago on May 13, 1969,
and I have owned the car for over 20 years. Mild respectful resto-mod additions have been made to improve the
performance from the original. This is the car you want if you love to drive. One of the greatest American Muscle
cars, this car was restored with the intention to improve safety and driveability from original factory specs. In
the restoration process of this car, all upgrades were respectful to the beauty of the original and
non-destructive. The car can easily be returned to the factory original if desired. The changes from stock are
Edelbrock Performer aluminum heads and intake(major weight savings and better compression), Holly 4160 aluminum
Carb(no more vapor lock on hot restarts), Total Control products rack and pinion steering system(no more loose
steering going into corners pushing 400hp), American Racing Torque Thrust-D wheels(no more skinny factory tires),
and Flowmaster exhaust system(No more restricted factory exhaust). Car has original factory air conditioning that
functions correctly. Correct Royal Maroon paint with Gold and White Stripes. The engine is detailed to look
original. Factory-look in-dash CD changer/Cassette(so you plug in your phone for music/google maps.) Rare original
Emminger report included (as well as Marti Report.)