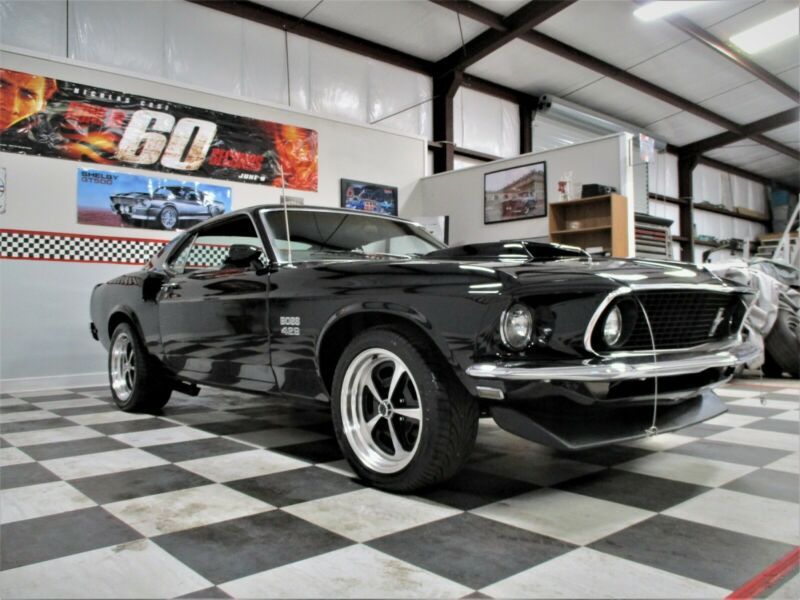 Absolutely Gorgeous 1969 Mustang Fastback 429 tribute. This car started life as a real 1969 Mustang F code real
Fastback / Sport roof V-8 Mustang. It has been restored and built into the beast that you see today. It has a 429
Cobra Jet dressed 5.8 V-8 engine with an estimated 500HP, with Edelbrock Aluminum heads, Solid lift race cam,
Edelbrock Air Gap aluminum intake, Holley 750 Double Pumper, Electronic ignition, aluminum radiator with electric
fans, long tube headers into 3" exhaust with flow-masters. All that power is backed up by a heavy duty Borg-Warner
5 speed manual transmission with a Hurst shifter. The power is put to the ground thru the Ford 9' Posi-Trac rear
end with a 3.55 gear. It has all new factory power disc brakes and factory power steering. It has all new
suspension, both front and rear, new control arms, new ball joints, new leaf springs, new shocks. The interior is
like new with no issues, CD player with amp and 10" woofers, fold down rear seat. No rust on this car as all body
lines are straight as an arrow. The paint is new Jet Black base/clear and looks wet. It has sub-frame connectors
and traction bars to keep it from flexing while performance driving. The Bottom side is just as clean and nice as
the top..