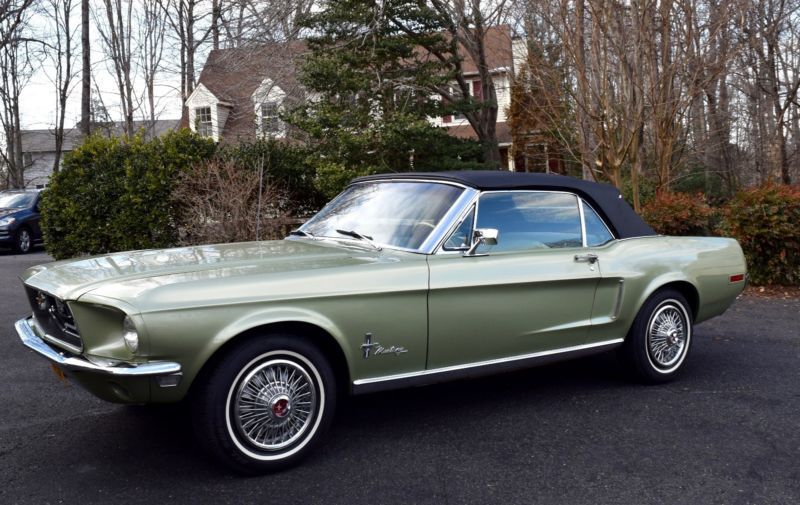 For more pictures email at: kathrynekvvencill@wolvesfans.com .

For Sale: 1968 Form Mustang S-Code 390 Convertible. This is a well cared for investment grade, big block Mustang
with 69,400 original miles. This is a verified numbers matching car with original parts. Documented 1 of 1
vehicle as originally ordered from San Jose, CA and verified by Marti Deluxe report.
Factory options include:
· Air Conditioning
· Power Steering
· Power Disc Brakes
· Power Top with Backlite Glass
· Visibility Group
· Interior Décor Group
· Center Console with Convenience Control Panel (very rare option)
· Tilt-away steering wheel
· 8-Track Stereo Radio
· More + (see Marti Report)
Dealer/PO Installed options include:
· Yellow GT Fog Lights with factory correct wiring
· Original Ford Speed Control-Complete (very rare option)
The black convertible top has been completely rebuilt and works perfectly. Interior front and rear seats have been
professionally reupholstered, including interior panels and carpeting. In 2015, the engine and ancillary
components were rebuilt to factory specs. No expense was spared to return this original California engine to its
99% factory correct condition. This S-Code 390 engine includes impossible to find parts such as: correct air
intake, S-tube, and exhaust manifold heat shield; complete Thermactor California emissions smog system; speed
control throttle linkages; vacuum line components; original carburetor and distributer; and more. Steering
components have been rebuilt including the steering box and power control valve and lines. In 2014 the C6
automatic transmission was rebuilt. Less then 150 miles on rebuilt engine and transmission.
This is an exceptional car but does still need some attention. The paint is in good condition (about a 7) but has
a few chips and scratches. There are a few small bubbles appearing on lower passenger door and the under-hood area
needs repainting (see pictures).
This is a fantastic driver’s car that turns heads everywhere. However, with minimal effort, this car would be
ready for you regional Ford auto show. These big blocks are not getting any cheaper. You will not find another
car like this, anywhere.