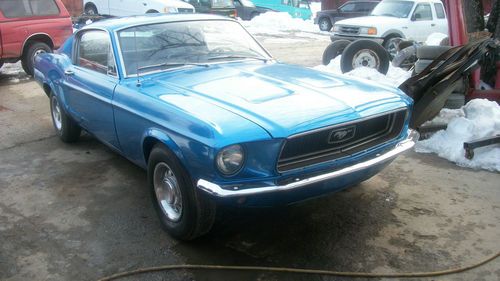 1968 Mustang Fastback S Code Blue V8 Automatic Fold down Rear Seat - New paint job in blue.  Original drivetrain is no longer with Mustang the original 390 Big Block engine, C6 transmission and 9 inch rear axle were not there when car was purchased. This today's gas prices having this big block wouldn't be easy at the gas pump. A 1968 289 V8 engine and C4 and 8 inch rear axle all work good. All original Ford parts in this Mustang. Michelin tires were just mounted on the original 1968 Mustang GT wheels, trim rings and center caps. Air cleaner and front narrow grille moldings will be installed on the Mustang.