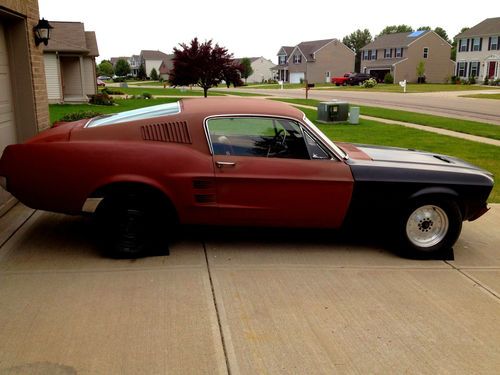 Condition: UsedA vehicle is considered used if it has been registered and issued a title. Used vehicles have had at least one previous owner. The condition of the exterior, interior and engine can vary depending on the vehicle's history. See the seller's listing for full details and description of any imperfections.Seller Notes:"Project"

NO MORE INTERNATIONAL BIDDERS Period! been burned too many times.......

Up for bids is a 1967 Mustang Fastback w/ a 390 big block engine and 4 speed transmission. Previous owner had the car in his barn since the early 80s, so I'm guessing that's why it's not a rust bucket like most northern cars. Also comes with an official Marti Report listing various features, build date, original color, etc)
The car has new right and left front fenders, along with new hood and hood hinges/springs. The bumper, new bumper brackets/arms, grill,  pony corral, headlight buckets, etc are not on the car but do come with it. Front frame rails are really good (refer to the photos). The car is complete with all glass and the correct door glass for the fastback.  The interior comes with most everything you need (front bucket seats, rear seats, fastback fiberglass trim, deluxe steering wheel etc....) it was an original 4 speed car and does still have the 4 speed pedal setup bolted in. Someone tried to replace the inner rear wheel wells, and will probably need to be done again or fixed. Rocker panels are solid also and are in really good shape. The rear quarters are solid and do not need to be replaced. Roof of car is also in great shape ...no dents, rust etc...the rear glass is dusty but looks to be flawless. Some one put a temporary sheet metal cover in the trunk floor.  Has a 9in rear end. This is a project car, but probably one of the best starting points you'll find.
Previous owner gave me the paperwork to get a new title, but I never pursued it. It will take a little $$ and processing time, but I was assured it was obtainable.
Car is sold as is where is, but I will do my best to help out with loading.
this is a no reserve auction, so it will for sure sell.
Auction ends on Sunday night (September 8th) at 9:00 pm CST
Please email me any and all questions

I've received over 100 questions and a ton of emails so far on the car so I'm going to try to answer a few of them on here to help out.

No, the car does not run...it is a "project car"... Motor and transmission is bolted in, but car will need work before it is road worthy again.
You will have to arrange shipping, but yes, I will help with loading onto trailer. I don't have a tractor, but we should be able to push it.
yes, the car is sold with a bill of sale.
yes, if you are local or feel like driving to see the car, I am more than willing to show it..
No, as of right now I do not have a buy it now price in mind.. Offers are welcome, but I will not end the auction just based on an offer.
Yes, floor boards do need replacement like most 50+ year old cars....
Yes it does have a carburetor, not pictured,  but comes with the rest of the spare parts.. (I believe it is a Holley but not sure)
Please bid to win, and if you have "0" feedback or are new to eBay please email me first...
More questions are welcome, just give me time to answer them