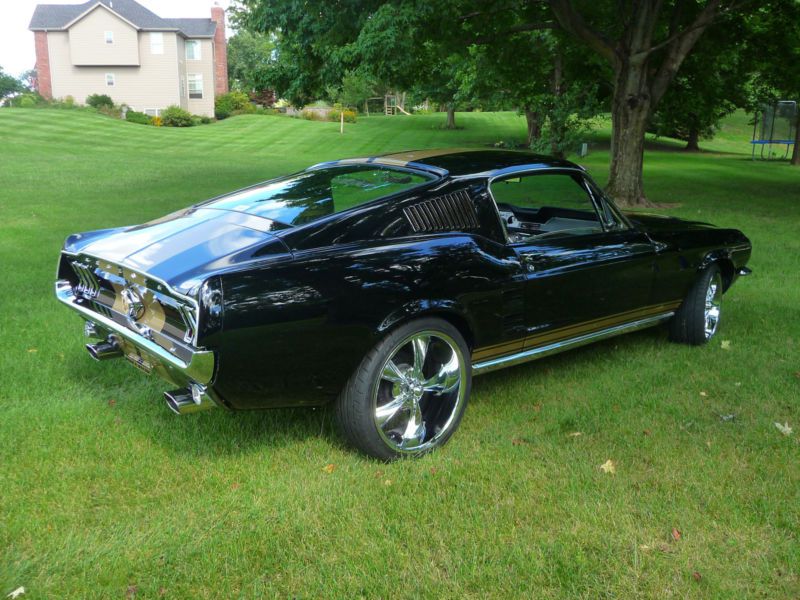 Please message me with questions at: rodrigolawson@juno.com .

1967 FORD MUSTANG FASTBACK. 289, 4 BARREL, AT. COMPLETELY RESTORED-AN ORIGINAL FASTBACK. THIS IS A CLONE OF A
SHELBY GT350 RENT-A-RACER. NEW BLACK PAINT WITH GOLD PAINTED STRIPES. NEW BLACK INTERIOR WITH SHELBY GT 350H LOGO
IN FRONT SEATS. HAS UPPER AND LOWER CONSOLE. FACTORY FRONT DISC BRAKES, FACTORY POWER STEERING, FACTORY A/C THAT
HAS BEEN UPGRADED TO A DIRECT FIT VINTAGE AIR HEATING AND COOLING SYSTEM. COMPLETE NEW WIRING SYSTEM AND THE FUSE
BOX IS LOCATED UNDER THE HOOD FOR EASY ACCESS. NEW VINTAGE LOOKING STEREO AND SPEAKERS. NEW WHEELS AND TIRES.
ENGINE WAS REBUILT AND IS APPROX. 325 HP. ALSO, TRANSMISSION REBUILT. HAS ONLY BEEN DRIVEN APPROX 50 MILES SINCE
COMPLETION-TOOK IT TO A LOCAL CAR SHOW AND IT WON BEST OF SHOW. WILL NEED A FRONT END ALIGNMENT AND THE FRONT
ASHTRAY IS NOT INSTALLED BECAUSE I CAN'T FIND THE ORIGINAL BRACKET TO HOLD IT IN PLACE-I DO HAVE THE ASHTRAY.
ABSOLUTELY BEAUTIFUL CAR. BUYER RESPONSIBLE FOR PICK-UP OR SHIPPING.