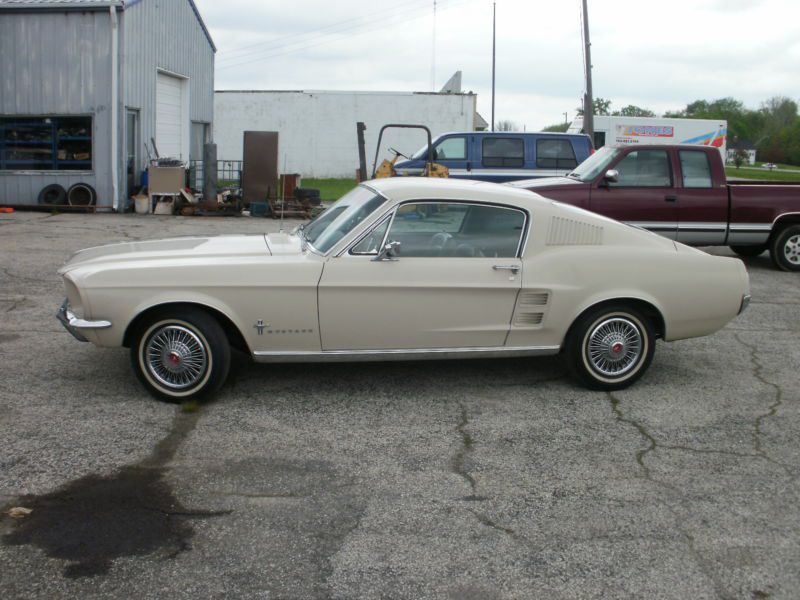 For more pictures email at: deidredsstaples@ukhackers.net .

1967 Mustang Fastback. Probable then cleanest rust free Mustang I've ever seen. It's never been in the rain or
snow. It's always been in a heated garage. It's only had 4,000 miles on it in the last 28 years. It has nearly all
the original parts. Has original paint and gaskets, and they look like they are two years old. only thing that
looks like may have been done is someone touched up the paint on the engine. The pictures tell the story. The
interior looks new. The gauges are still clear and bright, the red on the needles are still red. This car really
looks like its 2 years old. It is however, 49 years old. it has no rust but it does have a few dents and scrapes.
The worst dent is just right of center on the hood. it also has several other hail dent style dings here and there.
few look like they've been there since it was built. I've added several pics of the under carriage to show how rust
free this car really is. any rust seen is surface and probable rub off when cleaned up. Pics were taken prior to
car ever being cleaned up. Car doesn't look like it ever has been dirty or dusty. Interior matches the exterior.
nearly perfect. it has one small hole in the headliner. no tears in the seats, carpet has never been dirty. The
tires are old bias ply, maybe even the originals. It drives perfect. but tires show age cracks. I believe, with a
new set of tires the car can be driven across the country. It truly is that nice. it's like a 2 year old car. The
car has the 200 6 Cylinder engine and the C4 automatic transmission. Manual drum brakes. No A/C, No P/S. If your
looking for an all original Fastback that is correct and never molested, this is it. Your looking for a rust free
car to build that $150K Eleanor, this is it. Try to find another one this clean and straight, I've been rebuilding
classic Mustangs and Restomods for 30 years and I've never seen another one this original, straight, & Clean.
Therefor, I'll will demand the highest price. This car is that nice. Please look at all the pics then fill free to
ask any questions.