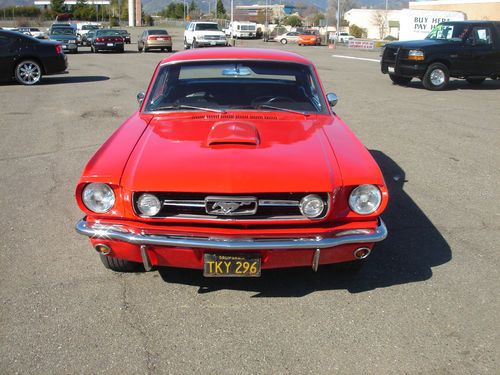 Condition: Used: A vehicle is considered used if it has been registered and issued a title. Used vehicles have had at least one previous owner. The condition of the exterior, interior and engine can vary depending on the vehicle's history. See the seller's listing for full details and description of any imperfections. ...
1966 Ford Mustang
Rebuilt C Code 289 V8 with alluminum manifold, 4 barrel carb
T-5 5 speed Transmission with Hurst shifter
Front Disc Brakes
Dual Exhaust
Front Fog Lights
Rust free CA Car
Runs and Drives great. Daily Driver
Up for sale we have a beautiful 1966 Ford Mustang. This one was built to be a daily driver. It starts right up, runs and drives great. I would not hesitate driving this one coast to coast. Easy fun car to drive. Has power steering, front disc brakes and more. The motor is a C Code 289V8 that was rebuilt about a year ago. Starts right up, no smoke, no oil leaks, and runs cool all day long. The original 4 speed was replaced with a newer t-5 5 speed transmission. Great to have that extra gear for freeway driving. Paint is in decent driver condition. No rust. Fiberglass hood was installed to give it a clean look. Interior is in decent shape. The carpet is a little faded. Seats have no tears or rips. This one also has the front fog light kit and it looks good.  This is a car that you can take anywhere and not have to worry about it. Mechanically sound car. Needs nothing but a little TLC. Car brakes and drives down the road straight. Great looking car.
We are a small dealer in Vacaville, CA (DLR#32389) and reserve the right to end the auction at anytime. Do not bid unless you intend on buying. We can assist with setting up shipping if needed. All buyers are subject to a $65.00 doc fee and all California buyers will be charged sales tax and registration costs based on selling price. Any questions please email me or contact me at (707) 999-8429. Clean California title in hand.