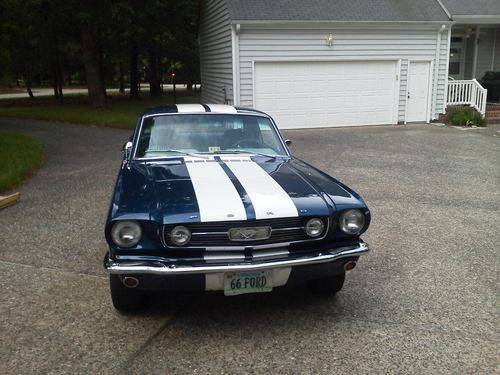 For Sale: 1966 Ford Mustang -- Restored / RestromodFor sale beautifully restored 1966 mustang coupe. This mustang features lots of amenities that would make it suitable for use as a daily driver or a luxurious weekend driver. The car is vista blue with white stripes. It features a 2 toned blue on silver pony interior. The car has cruise control, disc front breaks and rack and pinion power steering. The car also features AM/FM/Cassette radio with front aux input. It is powered by a 1991 5.0L 4 barrel Carbureted engine and AOD transmission
Features Listed from Headlights to Tail Lights:

Everything runs good, but may need a minor adjustment here and there. With just under 19,000 miles sense restoration, the car is in like new condition, this car was completely restored with new sheet metal for most parts, it would make a great car for driving around, showing, or just having a good time with. This car is NOT Concours Car, as it has been modified and customized.  There is damage to the paint in 2 places, under the hood and in the passenger side door jam where the door strike was adjusted. We would prefer cash at pickup. Car is sold as-is, as all used cars are. Will try to upload some more photos later.
Please feel free to call me at 804 432 2265  8am to 11pm EST.