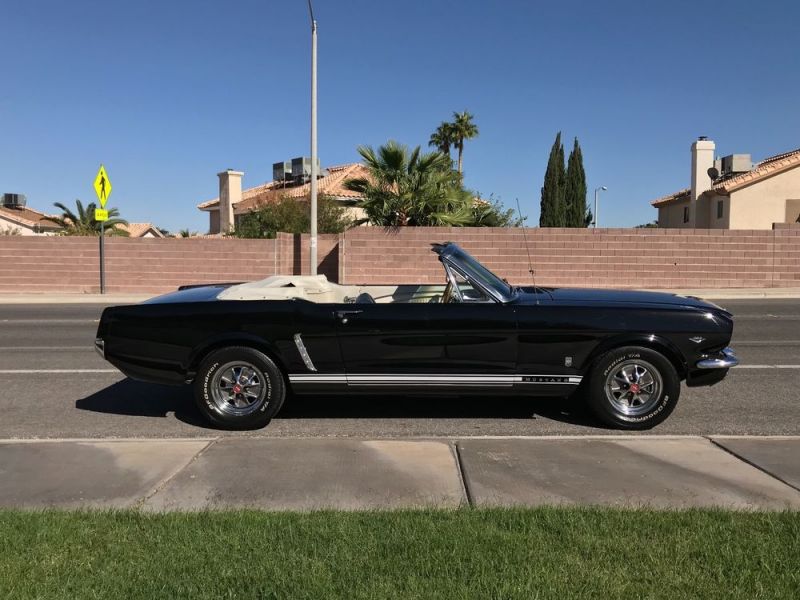 If you have more questions or want more details please email : tarrataarbaugh@delboys.com .

"1965 FORD MUSTANG GT CONVERTIBLE"
VERY RARE COLOR COMBO
"RAVEN BLACK" WITH BLACK AND WHITE DELUX LUXURY PONY INTERIOR
NUMBERS MATCHING 289 V8 ENGINE
NUMBERS MATCHING AUTOMATIC TRANSMISSION
CAR RUNS AND DRIVES EXCELLENT
THERE ARE NO ISSUES WITH THE DRIVE TRAIN WHAT SO EVER
CAR DOES NOT LEAK OR DRIP ANY TYPE OF FLUIDS OR SMOKES OF ANY KIND
I HAVE OWNED ALOT OF MUSTANGS IN MY DAY AND THIS IS BY FAR THE BEST DRIVING MUSTANG I EVER DROVE
I BOUGHT THIS CAR FROM THE ORIGINAL OWNER AND SHE SAID THOES MILES ARE ORIGINAL AND CORRECT,AND SHE SIGNED AND
NOTARIZED A BILL OF SALE STATING THE MILES ARE ORIGINAL AND NOT TAMPERED
CAR HAS HAD 1 REPRAY ON THE PAINT
BODY AND INTERIOR IS IN EXCELLENT CONDITION
DOES HAVE SOME MINOR CHIPS AS YOU CAN SEE IN THE VIDEO
BODY IS VERY STRAIGHT
POWER TOP
POWER STERRING
RALLY PAC THAT WORKS PERFECTLY FINE
FRONT DISC BRAKES
GT PACKAGE
289 V8
A CODE
ALL LIGHTS AND GAUDES WORK PERFECTLY FINE
AGAIN ILL HAVE NO PROBLEMS GETTING IN THIS CAR AND DRIVING IT ACROSS COUNTRY IN THIS PRESENT CONDITION
FLOORS SEEM TO HAVE SOME VERY MINOR RUST DUE TO ITS AGE NOTHING SERIOUS OR SERVER
ALL BODY PANELS ARE ORIGINAL AND IN EXCELLENT CONDITION
TRUNK COMPARTMENT IS IN EXCELLENT CONDITION WITH NO RUST OR ROT
INTERIOR HAS NO RIPS OR TEARS
GLASS IS ORIGINAL AND IN EXCELLENT CONDITION