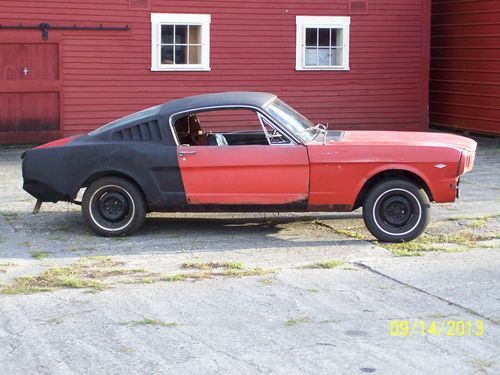 1965 Mustang Fastback project car.Just pulled this one out of the barn. DSO is Los Angeles Ca.This car is a great project for the experienced body man or restoration shop. It would be a nice Shelby GT350 replica. Originally it had a six cylinder,it was changed over to a 289 V8 a long time ago.Door glass is all there. Original color is Poppy Red.The rear quarters are original,although they need to be replaced.Fold down seat is in the car.What you see is what you get or just ask. Mustang fastbacks never go out of style !

Any questions please email or call: 802-463-4015-Thomas
SOLD AS-IS.
Buyer is responsible for shipping.
Bid for what you can afford or what you would be willing to pay .
I reserve the right to end the auction.
You can't drive it home.
Look at the pictures.
No stupid scammer's --scam-check.