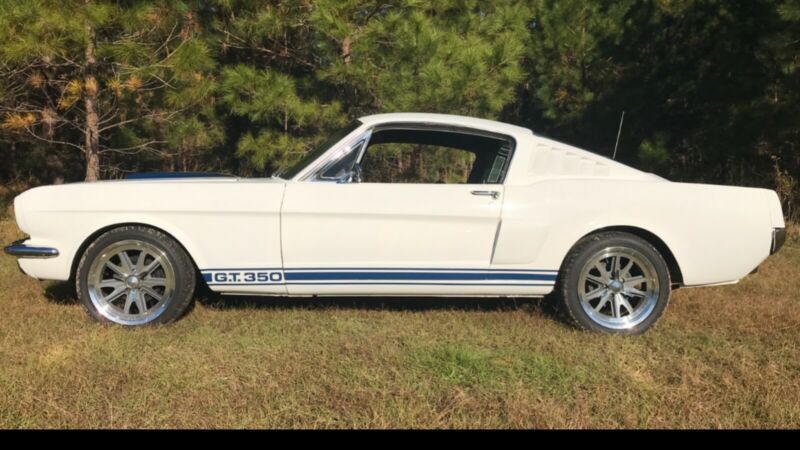 The Car restoration was done 2 years ago and garage kept since with less than 60 miles since restoration. I disassembled
the car and had the body soda blasted back to bare metal. Less than a pint of body filler was used. Painted with
DuPont Chromamax base and 4 coats of DuPont clear. All chrome on the car was replaced new. The original hood was
replaced with a steel/fiberglass GT350 hood and side scoops added. Added the factory fog lights in the grille with
the factory switch in dash. All new weatherstripping and rubber. New windshield. Stripes were painted Guardsman
Blue using stencil kit for accurate size and placement. All new lights and lenses. The interior was replaced with
new seats, door panels, and carpet. Has fold down rear seat. I replaced the rear seat trap door with one which
holds 6x9 MB Quart speakers. Has new kick panels which holds MB Quart speakers as well. Has Kenwood stereo which
I had planned on replacing with Bluetooth retro sounds. Has new console with Hurst shifter and knob. Has factory
a/c which was working before restoration. Never hooked hoses back up after engine was replaced. The factory 289
was replaced with a new 347 stroker and transmission replaced with a T5 manual. I do still have the perfect
running 289 and trans that was removed. Has Holley 650 double pumper carb. Engine has Shelby dress up kit. Very
strong running! New aluminum radiator. New Flowmaster exhaust which sounds tough. Has new fuel tank and sending
unit. All gauges it the car works perfectly. I added an oil pressure and temp gauge also which is tucked under
the dash somewhat hidden.