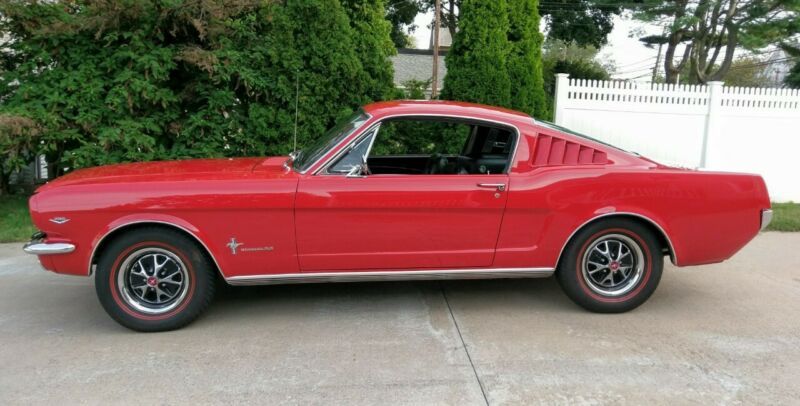 1965 Ford Mustang Fastback 289 V8 Fully restored. Show and Go!
Professionally restored in 2009. The car was rust free and only needed a cosmetic restoration which was done to a
very high standard.
This classic can be driven, enjoyed and has brought home its share of trophies at the local car shows.
Runs fantastic, handles great, and does not have any of the typical rattles of the older ponies.
The overall paint quality is excellent and the car has a great stance. Their is a small paint crack on the
passenger side below the rear glass where the roof begins to curve which is quite common. Other then perhaps a tiny
paint chip or two I believe you will find the body to be show ready.
The rear valance was changed to accommodate the GT style dual trumpet exhaust. Chrome trim, bumpers and glass all
look excellent and the windows roll up and down nicely.
The entire interior looks fantastic and everything works.
A custom Auto Sound Digital AM/FM with a satellite dock was installed in the original radio spot and speakers were
neatly placed into the front kick panels.
The car has the original C-code 289 V8 slightly dressed up with chrome valve covers and air cleaner.
Nicely upgraded to an Edelbrock Preformer 289 Intake and 4bbl carburetor. A nice set of headers was also added and
this car truly preforms like an A-Code 289 would. It pulls very strong and drives very smooth.
Front suspension was redone and although it is manual steering it is a breeze to steer and drives nice and
straight.
Radiator was replaced and it runs nice and cool.
The original door tag (will come with the car) was removed when the car was restored and replaced with a
reproduction door tag that shows the current color. The original vin # stamping is present on the drivers side
inner fender.
The inside of the trunk is nicely detailed and rock solid.
Floor pans and frame rails are in fantastic condition and were lightly undercoated at the time of the restoration.