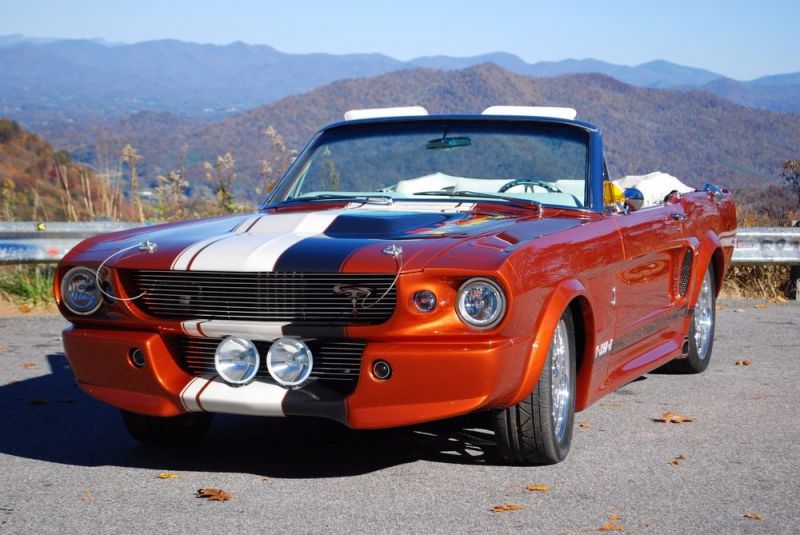 ANY QUESTIONS JUST EMAIL ME: mayemggootz@uk8.net .

This 1965 Custom Ford Mustang Convertible is a “One Car Parade”! She’s beautiful, she’s loud, and
there’s not another one like her. She has been displayed at car shows all over the country and has received many
awards. She was showcased at two Good Guys shows in 2017 and was awarded with an "Award of Excellence" at both.
This baby was built by our company, GT Graphics and Customs, Inc. to showcase our company’s ability to create a
gorgeous one of a kind. After every panel, nut, and bolt was sandblasted, a rotisserie restoration was performed
with an abundant amount of customization. Its lines were sharpened, every gap was perfected, many modifications
were made, and the custom paint work contains an abundant amount of pearl and flake. It is meant to be seen and
appreciated.
Here are the Specs:
Engine:
This Mustang has a custom built 302 Engine built by Dan Cansler Racing Engines in Sylva, North Carolina. Dan has
been in the business of building engines for decades. He is well-known in the professional racing industry. Along
with the engine is a 600 Holly Carburetor, an Edelbrock Aluminum Intake, an MSD Billet Distributor, polished valve
covers and wrapped long tube headers, an aluminum four core radiator, a chrome master cylinder and chrome brake
booster, all enclosed in the clean, custom painted and modified engine bay. An airbrushed cobra is painted under
the hood and the Mustang To Fear hinges prop up the hood nicely to reveal the customizations. The long tube
headers are attached to two stainless steel 2 ½” side exhaust system that help provide the nice, choppy rumble.
Drivetrain/Suspension:
At the bottom of this Mustang, a freshly restored undercarriage is coated with Raptor Liner that is tinted to match
the body color. This Liner was applied to not only the undercarriage, but inside the wheel wells, inside the
fenders, quarter panels, trunk, and inside the floor pan for that added protection against rust and sound deadening
purposes. There is a C4 Automatic Monster Transmission Built for 500 HP, a 2300-2500 Stall Torque Converter, a
9” Rear End and 350 Gear/28 Spline Axles. The suspension has Urethane Bushings for performance and handling. It
has front and back sway bars. It has a Borgeson Steering box and has been lowered two inches for those tight
turns.