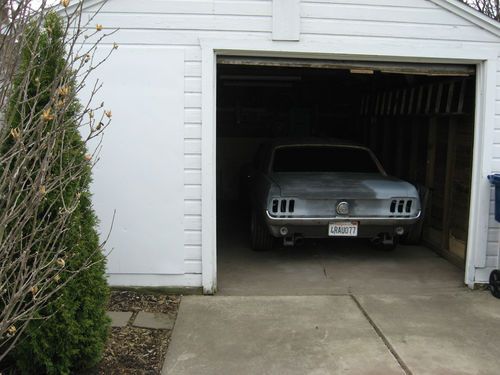 I purchased this Mustang last October, and had it shipped from California. I have worked on cars all my life, and was looking forward to restoring this basically solid car, but my personal circumstances have changed, and I need to sell. This car needs a lot of work, but it is a nice starting point for a rewarding project. It is just what I was looking for. I'll start with a brief overview description, then go on to some further details. Please contact me if you have any questions, and I'll be glad to answer them. I have a reasonable reserve, and if this is what you are looking for, you should get a nice price. This is not a rot box, like some of these cars I have seen from the north and east of the U.S. It is a basically solid foundation for a fun project.

The car has sat for most of the last ten years, as far as I can tell. Someone started to take it apart, and never finished. I got the car running last fall. I changed the oil and antifreeze, replaced the gas filter, and put a new battery in it. I was able to run the car to full warm-up, and it sounded great. There was no blue tailpipe smoke, and the engine sounded strong. This spring, I can't get fuel to the carb. The new fuel pump that the previous owner put in may be bad, or something may be blocking the fuel line. In any case, it won't run, and it's because the fuel is not reaching the carb. I don't have time to investigate further. I ran the car for the video by putting gas directly in the carb. This is gas for my leafblower, so it has oil in it. This, and the fact the carb bowl is not full, accounts for the smoke you see in the video, but I wanted you to hear the car run. Please see the video on YouTube on my channel: JJMcKinnon1  http://www.youtube.com/user/JJMcKinnon1

The transmission makes a scary rotational noise sometimes when in gear, the fluid is not burnt. Not sure what is wrong there. For shipping purposes consider this car a "roller" that will need a winch or something to get loaded on the truck or trailer. I will ship with the battery disconnected.

I was told by the previous owner that the motor is a 302, and transmission an FMX automatic. The car was originally a 289 2v with 3 speed manual. The motor has an Edelbrock "Performance 289" intake, Weber/Edelbrock 4v Carb (8867), and headers with full and intact dual exhaust with 3" tips. It likely has a performance cam of some sort, not sure what else. It also has a rear sway bar.

The car has the original door tag. I can give you the details if you are interested. It is a San Jose car, originally Springtime Yellow, but was painted red at least two times as far as I can tell, from nosing around. I have not been able to do anything to the car, other than getting it running the one day last Fall.

This car will need a lot of work, but the parts are readily available, and reasonably priced. I include some nice Mustang books as pictured. I include a shop manual, and wiring diagram to aid you on your project. Thanks for looking. Email me with any questions, and then we can talk on the phone as well if you would rather, for more details.