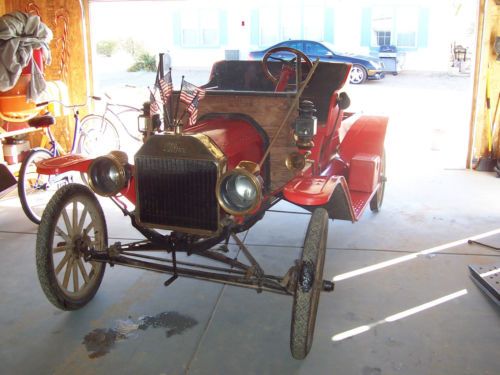 Condition: UsedA vehicle is considered used if it has been registered and issued a title. Used vehicles have had at least one previous owner. The condition of the exterior, interior and engine can vary depending on the vehicle's history. See the seller's listing for full details and description of any imperfections.Seller Notes:"The vehicle is in fair condition for a 1912 model t. Has problems which are reveled in the pictures and description see below."

We are selling our 1912 Model T Ford. This was our father's vehicle before he passed away and has always been garage kept.  We have two new tires and tubes for the back wheels, as seen in the pictures.  We have the windshield that can be seen in the photos and it has a "Exhaust Whistle" that can be seen in the photos.  The horn bulb is in poor condition  and there isn't any seat springs.  The last time that I recall it running was 1976, however, I'm not certain of the exact date.  We have tested the coils and they are operational. It had been converted into a pickup, but we have the rear seat and it can be returned to a touring easily. The front tires are in in good condition and this vehicle would be a terrific addition to someone's collection. We can not find the title at this time so this is why it is being sold as salvage. However if we find it we will of coarse include it with the purchase, no guarantee to find it.