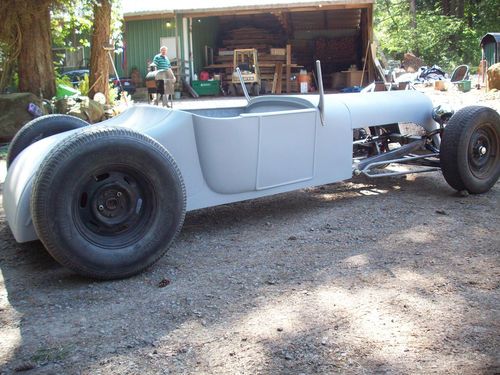 This is a 1927 Ford Lakester project, it ishas all the body work done and is in primer. Buyer will need to purchase engine and trans, do the wiring and paint it. This has a all tube frame that has tig welded crossmembers and all the engine and trans mounts for a small block ford and automatic trans, just bolt it in. Has 32 style dash, tilt front end, custom grille, floor and trans tunnel done, cool windshield posts, and much more. All new parts, drop axle, disc brake kit shocks, headlights, body grille, hood, master cylinder. The used or rebuilt parts, 8 inch ford rearend, coil over rear shocks, front hairpins, and vega steering box. This is a project and will require some work. It is sold with a bill of sale only, no title. Tires are just rollers to move it around on. Please email with any questions before bidding or if you would like more pictures or to come and look at it. Buyer is responsable for shipping if needed. Payment via cash when picked up within 7 days unless other arrangements are made ahead of time.