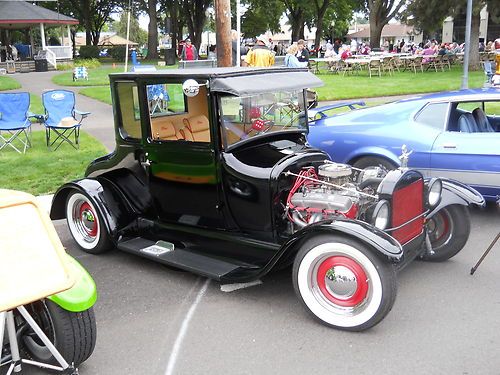 This is a beautiful 1927 steel body ford Model T coupe with fiberglass fenders. Build was just completed a few months ago. Paint is not show quality but is fresh and has a nice gloss and could be color sanded and buffed out for close to show quality finish.  Interior is tan/red vinyl with custom seats.  I replaced the top wood framework with 1" steel tube welded to the top for added strength and covered the top with original type vinyl. The GM 350 and trans were used but in good running condition.  Milage is unknown.  All gages are new Auto Meter and work except the speedometer.  It is also new but I can't get it to work.  Wheels are Vintiques with chrome outer rim and red centers and the tires are all new wide whites.  New EZ wiring. Front disc and rear drum brakes.  4 bar front and rear with coil overs on the rear.  Rear end is S-10 with 3:73 gears.  Has Locar shifter but no hand brake and no windshield wiper.  I have a hand wiper that I will include.  This is a great little streetrod and gets attention.  These Model T coupes are very rare and most of the bodies are rusted out and the parts are getting hard to find.  This car was a tribute to the cars we built and drove in the 1960's and many hours were spent finding parts.   I'm not interested in any trades so don't bother asking.  You may call me if you have any questions 541 297 0412 before 8pm Pacific time.