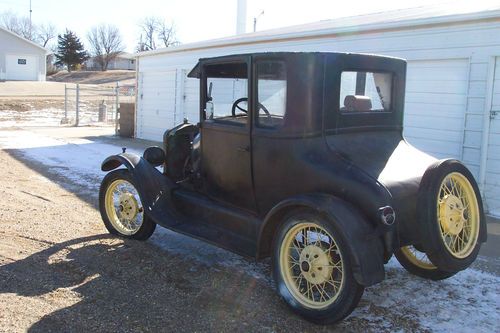 Up for sale is a 1926 Ford Model T Coupe with wire wheels. It had an older amatuer restoration when I bought it. It runs and drives great. I had the bottom end of the motor gone through, put a new starter ring on, installed new bands in the transmission, and a new wiring harness. It has early mustang bucket seats. It does need new tires. The over all body is in good shape with a little rust on the bottom of the body. This coupe would make a great parade car or just a fun around town run about as it is. It would also be a great start for a complete restoration or hot rod project. It has a good Nebraska title. Buyer is responsable for all shipping cost and we will be happy to help with loading. If you have any questions please call 402-373-2452 and thank you for looking.