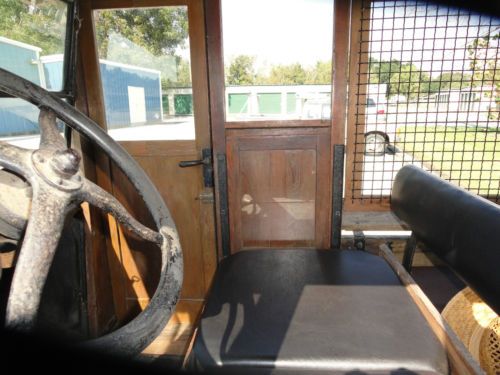 Condition: UsedA vehicle is considered used if it has been registered and issued a title. Used vehicles have had at least one previous owner. The condition of the exterior, interior and engine can vary depending on the vehicle's history. See the seller's listing for full details and description of any imperfections.Seller Notes:"Complete drivable unrestored barn find"

I bought this truck 6 months ago out of long term (10 years?) dry storage for the fun of getting it back on the road.  I have everything working except that it won't run on mag.  I have not looked into this.  I have driven it several times on 5-10 mile outings at 25 mph.  It runs cool and gets lots of thumbs up.  It has rebuilt coils and coil box, much new wiring, new hoses, belt, carb, exhaust, engine gaskets, fan hub, battery, battery cables, outside mirror,  starter switch, brake quadrant,  6v alternator, and steering stabilizer.  Screen side panels and rear doors are new but blend well or could be easily removed if preferred. This truck (car chassis) is useable as is but is old and tired; definitely not tour worthy but complete and operable with great patina and visual appeal!!  Head lights work, high and low, as does tail light and horn. Wiper inoperable. Doors are narrow and seating position is high which may be problematic for a large person.  I can assist in loading.  $500.00 non refundable Paypal deposit required within 48 hrs of auction closing and full payment required within 7 days.  Truck doesn't move until funds have cleared. Don't bid without contacting me if your feedback score is less than 10 or if you have recent negatives.