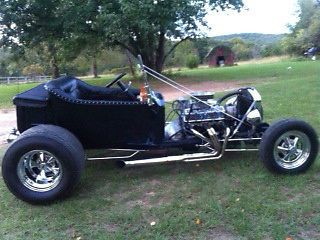 For sale is a 1923 Ford T bucket roadster.  It has a 350 Chevy 4 bolt main stock engine and a 700R automatic transmission.  Motor and tranny have about 80k on them and run good.  Burns no oil and is strong. It has a 600 Edelbrock carb and a 10 bolt rearend.  It has 29x18.50-15LT Mickey Thompson tires on the back and skinny 5-60-15 Goodyear tires on the Front.  It has Cragar wheels on it and Sunpro gauges.  It has an am/fm cassette radio in it.  It runs good down the road and is very fun to drive.  It is not lacking in power.  Needing to sell for money to restore my '68 Camaro.