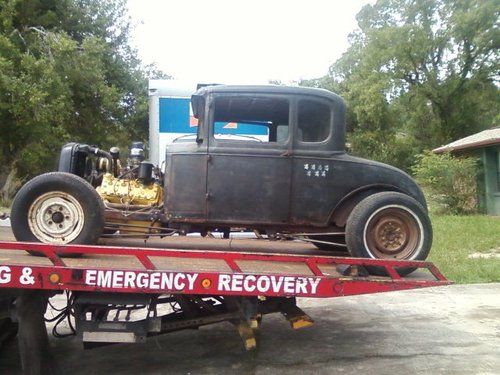 Steel Body on a Rolling Chassis.Car Has been In Storage for Years now.It was Driven Into the Unit 1 year ago This Month.Ran Fine at the time,Motor Stuck from Sitting.Here's your Chance to own a piece Of history at a Poor mans Price.PROJECT Steel body Model A on Rolling Chassis.V-8  8BA Flat head.Three speed Stick shift with electric Over drive.Spare transmission.This is a PROJECT vehicle. No you can not drive.No battery,No brakes .All steel body except Trunk Lid which is Fiberglass as well as the Grill shell. Brakes and headlamps as well as Patch panels come with it. Includes a brand new Set of headers(Not installed) and a Hi Rise dual carb Intake manifold new in box.Hate To Sell. A "new" empty Fiberglass Body costs 15 thousand dollars online. ( http://www.wescottsauto.com/WebCatalog/B-Body/B10-11-5windowCoupe.pdf)It is what it is.Roof has been filled with steel ribs and sheet metal.No side door Glass. No vin or Title. YOU must apply for them.Has Leaf spring Type front end with Steering box and Chrysler rear End.New 32 style Flat dash Panel included.Rear original Glass cracked but Intact. No Interior to Speak of.PLEASE READ THE ENTIRE AD! No You Can not test Drive the Car! The brakes Have To Be Installed,It Needs a master Cylinder and Lines Run. I have Some Brake Parts,shoes, hoses Ect. THIS IS A PROJECT CAR!! I am selling for much less than I have invested.It is a very Solid Start to a very cool Rat Rod.It has original Tilt out windsheild + Visor.Hate to sell as I've wanted this car forever.I have too many projects.Price is pretty firm, worst case I'll finish it.It Is In storage and hard to Photograph at this time.Bid is To Own, Not to tire Kick and hem and Haw.If You Dont Know what a Rat Rod is Or are 80 years old this Probably isn't The Car for you.With a little work, you can Own The coolest Car in town.