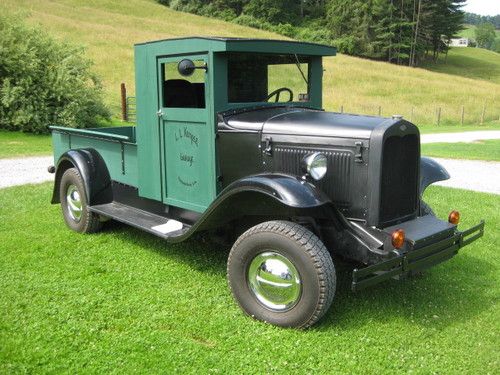 Truck is titled as 2010 Assembled Pick Up Truck
Clear WV Title
Inspection Sticker good until end of July 2013
Cowl,Hood and Radiator shell 1931
Wood Cab and Bed - White oak and Plywood
Huckster Style Body
2.9 V6 engine- fuel injected
5 speed manual transmission
Fenders are 1932 ford coupe Fiberglass
Wood running boards
Tires  30 x 9.50 x 15
Full moon hub caps
Vehicle runs good
Does have some squeaks from wood
12 volt
Do not know miles on vehicle  No speedometer or odometer
Any questions call 304-269-7198 or cell 304-476-4333 ( Do not always have service)
Could be painted or left as is
The Truck is being sold AS IS !   No Warrenty !