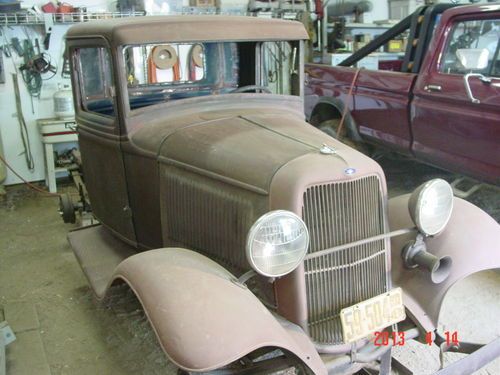 Super straight 1933 Ford project truck. Very minimal rust or dents, the fenders, running boards and grille are nearly flawless. Worst of the rust is the bottom edge of the drivers door, and the passenger rear cab corner, all visible in the photos.  This was originally a 1 1/4 ton Model B with a 4 cylinder "B" engine. The chassis has been cut to pickup length. There is a 1937 21 stud flathead coupled to a 3 speed 60's Mustang tranny mocked up and sitting in place. GM 10 bolt rear end. This was a complete and running truck just a few years before I bought it. Most of the parts are all there, except the seat and glass.Clear Nebraska title. I would consider selling without the flathead/tranny, contact me on that.

Radiator is in nearly perfect shape, but is for the 4 cyl Model B engine. It will need to be altered to have 2 inlets/2outlets for the flathead 8.