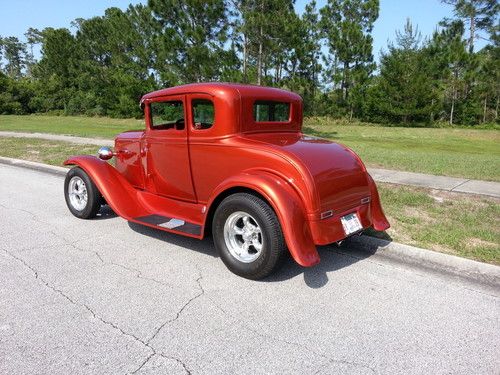 Condition: Used: A vehicle is considered used if it has been registered and issued a title. Used vehicles have had at least one previous owner. The condition of the exterior, interior and engine can vary depending on the vehicle's history. See the seller's listing for full details and description of any imperfections. ...
NO Reserve Auction!  Very good deal!
Steel Body 1931 Ford Coupe, Top Chopped 2 Inches, Full Boxed Tube Frame,4 Link Rear With Coilovers, 4 Bar 4 Inch Droped Front Axle With Vega Cross Stear, Power Disc Brakes On Front Drum In Back, Tilt Steering With Power Windows And Locks, American Thrust Wheels, Small Block Chevy With Small Cam And 2 4 Carbs, 350 Turbo Trans, Car Runs Good Drives Good And Does Not Overheat,  Real Nice Rare car. Has a radio system, power windows and locks and keyless entry. Car a 9.8/10
Serious Buyers call 734-377-9232
Can Check out my website for other cars I have for sale . Sold Cars <- Link or type "koastal Kustoms" In search bar.
For More pictures of this car I have a photo bucket Album and hers link. 1931 Ford
I also have a 1965 and a1966 chevelle SS Malibus for sale. $44,000 Each. Email for pictures.
This is a nice car. Don't miss your chance to buy. Located in Port Orange Florida. Feel Free to Email if any questions.